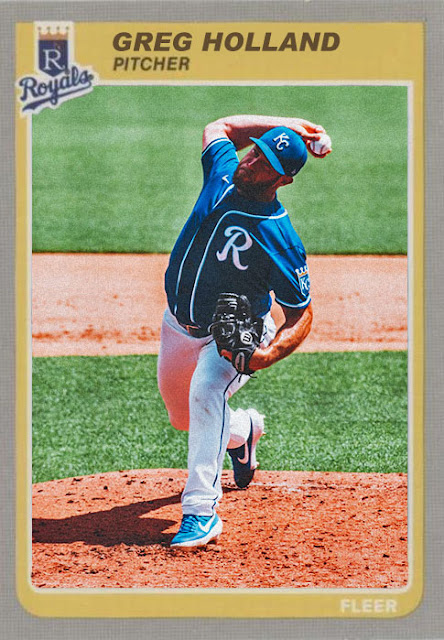 When I made this custom, Greg Holland was doing  well in the 9th for KC, but since then they've decided to go with another former closer with  control issues for the ninth, Trevor Rosenthal. So it's kind of cool that they've got a platoon of formerly-caustic closers. Holland works set-up, Rosenthal closes games. That is assuming that the team wins, which  happens rarely.

It's honestly the type of post-2016 Royals team you'd expect. The pitching is a lot of untrusted people, and rookies with weird names [Kris Bubic! BOOB. ICK. Locker-mate of Richard Lovelady, I hope], and farmhands from other clubs that strike out a lot. This team now reads like a list of prospects that failed in other farm systems- Maikel Franco, Ryan McBroom, Jorge Soler, Franchy Cordero...heck, I guess Ian Kennedy counts too. I'd even throw Bubba Starling in there, even if he's failed in THIS farm system.

Like usual, you've got some people actually doing well, and you've got Salvador Perez, Franco, Whit Merrifield, Jorge Soler, Adalberto Mondesi and SURPRISINGLY RYAN O'HEARN, who all seem to be hitting. And you also have Bubic, Brad Keller and Jacob Junis scoring high WARs for the moment. But again, some places are uneven. The rest of the AL Central is further along, even Detroit, and a lot of this team feels like an interlude in between competitive rosters. You wonder when Merrifield and Soler are finally going to join competitive rosters, how far away  that'll be.

At the very least, Greg Holland and Trevor Rosenthal have job stability in 2020. Which is nice.

Coming Tomorrow- Nobody in baseball thinks like this guy. And to think, we underestimated him after a slow start last year.
Posted by Jordan at 10:34 PM
Labels: Custom Cards, Greg Holland, Royals