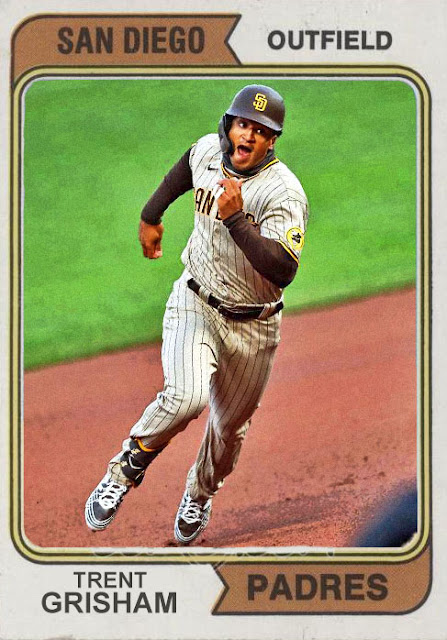 [Like with  Bieber, the easy joke applies here as well]

So, the early run  wasn't exactly misleading. This isn't a bad Padres team at all. They just...happen to continue to play in  the NL  West, so it's difficult for them at times, I think.

Good news is the core hadn't disappointed. Fernando Tatis, Manny Machado, Wil Myers and post-poo-poo-break Eric Hosmer are all doing well, but it's the  supplements  to this  that are surprising me. Trent Grisham, who spent last September covering for Christian Yelich, is not not only doing better than him, but is also doing better  than Eric Lauer, who he was traded for. He's not perfect, and he strikes out a little too much, but he's got good hits and RBI numbers so far, and is fitting  right into this  lineup like he honestly couldn't in Milwaukee.

You also have Jake Cronenworth as a variable. Cronenworth started some games in place of Hosmer, and got off to an exceptional start, hitting .325 with  2 homers in  14 games, which  isn't bad. He's also one of two Padres with a OPS of over 1, the other being Tatis. It's nice to have young  players that are compatible  with the  crux of the lineup. You can't get that everywhere.

The rotation is...shakier, but still good. Lucchesi got sent down, and Chris Paddack isn't as sharp as last season, but  Garrett Richards, Dinelson Lamet and Zach Davies have all been great. Lamet particularly is having his strongest  season yet, proving that last year's decent stuff in August was just a prelude. And though it's sad that Kirby Yates doesn't have his  A material this year, having Matt Strahm, Pierce Johnson and Drew Pomeranz excelling in  relief certainly helps matters.

A few elements need fixing, like  the bullpen and some lineup parts, but this is a better Padres team than any recent one, and I'm glad they're all gelling well.

Coming Tomorrow- Catcher for a team currently getting  shut down by Gerrit Cole.
Posted by Jordan at 8:53 PM