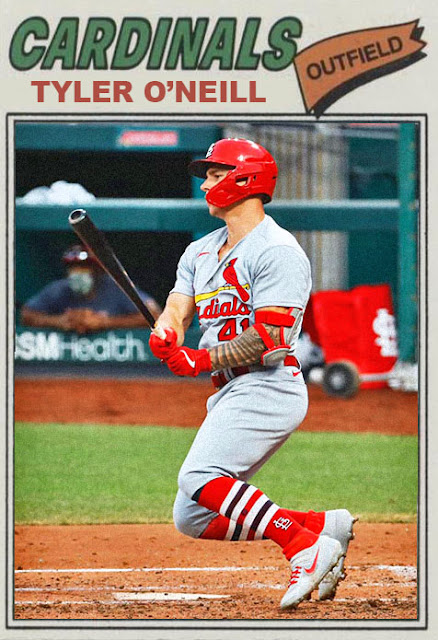 The St. Louis Cardinals have been back for nearly two weeks, and...honestly, are pretty close to where they were before. Close to .500, lacking a strong center.

The biggest news is that the hero for this team has arrived, and that hero is Paul Goldschmidt. After an okay first year in St. Louis, Goldy is now hitting .344 with 8 RBIs and a .9 WAR. Goldy's leadership capabilities and power numbers have returned from AZ, and he is leading this team along with Paul DeJong, Harrison Bader and...Brad Miller for some reason, whose runaway bat from Philly last year has returned for 2020.

Plus, the main core of Adam Wainwright, Jack Flaherty, Kwang-Hyun Kim and Dakota Hudson has been pretty strong, winning games without too many strikeouts. Even Johan Oviedo, after one start, is already rivaling those 4 and making for a seriously strong rotation.

Granted, the delayed start has affected a few people, including Tyler O'Neill, Kolten Wong and Matt Carpenter, who aren't hitting as well as usual so far, as well as Andrew Miller and Daniel Ponce de Leon.  You also have guys like Molina and De Jong who took longer to come back from COVID.

The concerning part is that, despite all this progress, they're still in 2nd behind the Cubs, and just sort of waiting to catch up. The next month may be a serious crunch, because they're still playoff favorites, but they're behind in terms of games. Hopefully they have enough to stay relevant, especially in a very Cubs-centric year.

Coming Tomorrow- infielder extraordinaire for a last place team with too many great players to be in last.
Posted by Jordan at 10:08 PM