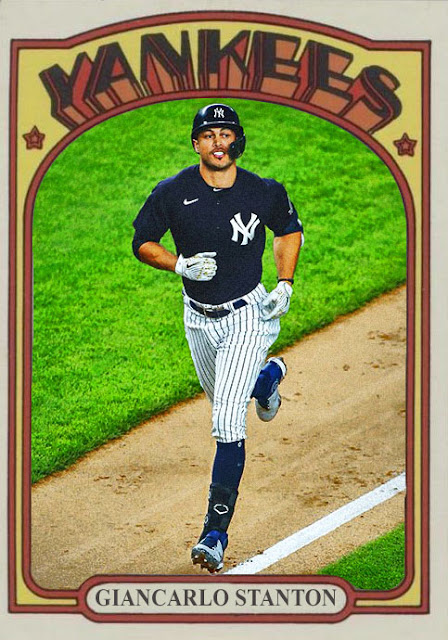 I imagine you're all sick of this, and I'm sorry...but let's talk about my 9-2 Yankees.

Granted, the  only people we really have  to worry about are Nick Nelson and his ditto-eyes [woo, a Gen-Z reference, edgy!], J.A. Happ, James Paxton and Gary Sanchez. Everybody else, basically, is killing it. Giancarlo Stanton has his better averages back, and is hitting well. Aaron Judge is the hottest player in the MLB, and hit his 7th home run tonight. Gerrit Cole, Jordan Montgomery and Masahiro Tanaka seem to be in good shape. Zack Britton, Adam Ottavino and Chad Green have become a powerful bullpen trio in Aroldis Chapman's absence.

It's also just nice to see 2019 successes like Gio Urshela, DJ LeMahieu, Mike Tauchman, and the 1B duo of Ford and Voit, have carried over into this year. And it really helps, because instead of the bulk of the lineup being injured, a lot of people  aren't hitting for average yet, including Sanchez, Hicks and Gardy, and it's nice that the newer, more odd additions are still working and ready  to step up. Which means, quite astonishingly, that it's possible for this team to  have the same ragtag, underdog quality as 2019...without everybody getting hurt. It's really nice, actually.

There's some minor problems with starting pitching that'll hopefully get  ironed out, but this Yankee team is seeming hella confident, and stronger than most other competitors. It's a great start, and a good sign of more inevitability to come.

Coming  Tomorrow- Most unlikely  hero for the Phillies ever.
Posted by Jordan at 11:16 PM
Labels: Custom Cards, Giancarlo Stanton, Yankees