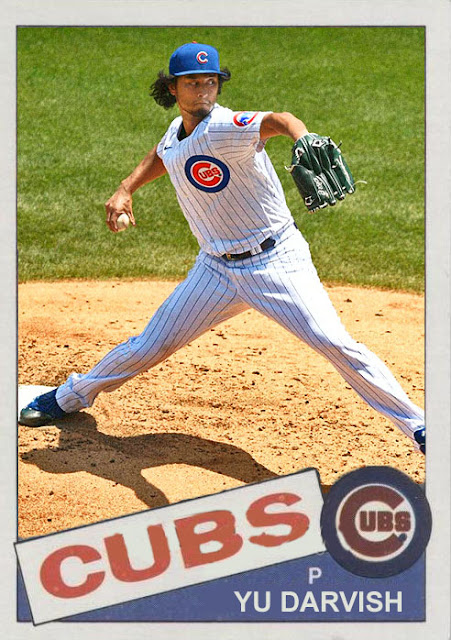 Okay. So the Cubs have lost a couple of games in the past week. They're still really good, and the NL Central still pretty much belongs to them.

There have been a lot of mega-Cubs rotations recently, and the 2016 Lester-Arrieta-Hammel-Hendricks-Lackey one probably  reigns supreme, but right now, we've got a good one with Darvish-Lester-Hendricks-Mills. True, missing Jose Quintana does rob the team of a competent fifth hand, though Colin Rea is trying and Adbert Azolay just had a decent audition, but those top four are all killing it right now. Yu Darvish is genuinely having his best season since 2017. Jon Lester has completely rebounded from his rocky 2019, and has 2 wins and a 2.74 ERA, despite focusing less on strikeouts. Kyle Hendricks has 3 wins and is still surging. Alec Mills, the biggest surprise, has 2 wins and a 2.84 ERA in 3 starts. This is a pretty strong foursome, and if they all stay at it, the Cubs could be a MAJOR postseason threat.

As for the lineup...despite the slumping Kris Bryant, we've got a nice one this year. Rizzo, Baez and Contreras are doing well, as predicted, but David Bote and Ian  Happ have been making the most of their starting roles, Jason Kipnis has been a fantastic bench piece, and Kyle Schwarber at least has a lot of RBIs.

This might be the best Cubs team since the World Series run, and it would be a lot of fun to see a team like this play into October. There's a lot of pieces that are really impressing me, and a return to form from Kris Bryant will reassure me a bit more.

Coming Tomorrow- His team has won six straight, so I have to say nice things, but they're heading to Coors Field, so perhaps not many of them.
Posted by Jordan at 9:00 PM
Labels: Cubs, Custom Cards, Yu Darvish