Topps Cards That Should Have Been: 2009 Billy Wagner 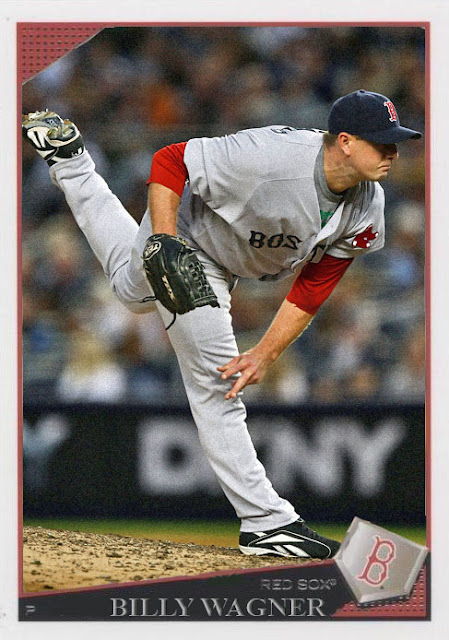 The 2009 season  for Billy Wagner is bookended by two seasons that mark the best output of his borderline-Hall-of-Fame career. In 2008, for the Mets, he notched 27 saves and an All Star appearance. In 2010, for the Braves, he capped his career with 37 saves, 104 strikeouts, and his 7th and final all star appearance.

Yet...2009 still happened. Topps, only putting out a flagship card of his Mets stuff from the previous year, swept it under the rug in flagship and update. But, there was a bit of business that occurred.

Wagner missed most of the 2009 season  due to recovery from Tommy John surgery, which had shortened his 2008 season. Once he finally got on the mound for the Mets in August 2009, he was no longer the Mets' closer- Francisco Rodriguez made the job  his own, and had reduced Wagner to a middle reliever. To this end, Wagner proclaimed he'd pitched his last game as a Met. So, right before the waiver deadline, the Mets traded Wagner to Boston for two second-stringers.

The situation was similar for the Red Sox. Jonathan Papelbon was the designated closer, and he was doing a  great job, in the midst of a 38-save year. So, again, Wagner would be called upon  for middle relief. Despite the downgrade, Wagner would post a 1.98 ERA and 22 strikeouts in 15 games. In two postseason appearances for Boston, he'd allow two earned runs, helping the Angels advance.

Despite his  woes, the numbers weren't bad, he could still pitch like a champ, and he cemented his  status as an all-time great reliever, paving the way for the Braves to sign him in 2010.

Wagner got a Heritage High Number release that year [sidenote-Heritage High should always be released late enough to include waiver deals], but not a flasgship Topps card as a Red Sock in 2009. So I made one. I think this one works.
Posted by Jordan at 3:28 PM
Labels: 2009, Billy Wagner, Custom Cards, Red Sox, Topps Cards That Should Have Been