The last 60 cards in the 2020 Final Edition set start here. There are still some big rookies, big Topps omissions, and big trades from 2020 to cover with this set, so let's not waste any time: 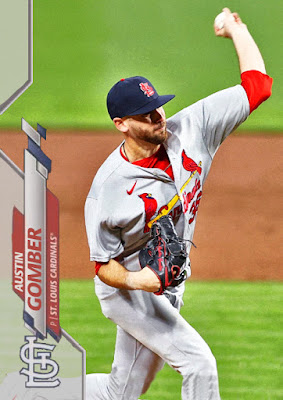 Card #271- Austin Gomber, St. Louis Cardinals
One of the more intriguing rookies of the 2018 season, Austin Gomber didn't make any appearances during 2019 for St. Louis, and was brought up in 2020 in order to circumvent the number of injured or disappointing starters that was growing. Gomber had a 1.86 ERA in 14 games, but only four of them were starts, and it was seeming like the Cards were running out of room for him. Gomber would eventually become the main piece in the trade that would bring Nolan Arenado to St. Louis, and has been decent in 10 starts for the Rockies. 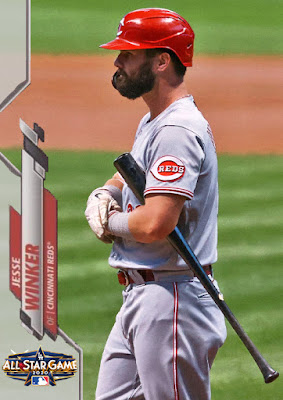 Card #272- Jesse Winker ASG, Cincinnati Reds
In the span of a few seasons, Jesse Winker went from a bench bat with nowhere to start to one of the most crucial contact sluggers in Cincinnati. Last year, Winker hit .255 with 23 RBIs and 12 homers. It was a season that would have garnered an ASG nod for Winker had the 2020 game happened. Thankfully, it's looking like that redemption could come this year, as he's having a career year so far with a .349 average, 13 homers and 29 RBIs. 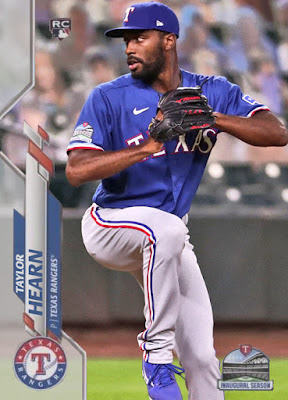 Card #273- Taylor Hearn, Texas Rangers
Taylor Hearn's sole start in 2019 was a disastrous one, as he was rocked in a span of 8 batters, only registering 1 out, and 4 runs, before being removed. So in 2020, the Rangers used Hearn as a bullpen piece, and he did a ton better. In 14 games, Hearn had a 3.63 ERA with 23 Ks, which wasn't bad at all for an eventless team like the 2020 Rangers. He's still getting use from this team, and though he has a higher ERA, he's still getting reps in. 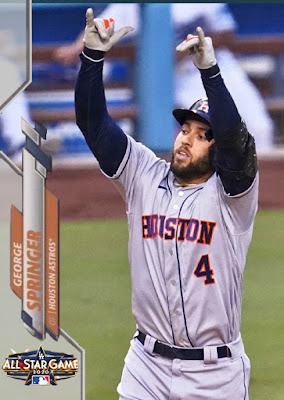 Card #274- George Springer ASG, Houston Astros
Though his outfield mate Kyle Tucker would have started the ASG in left for the AL if last year's game had happened, George Springer would have garnered plenty of votes, and would be a decent choice for a bench bat. It would be a decision not many people would have much trouble with, as Springer hit .265 with 32 RBIs and 14 homers last year, flexing his power muscles one last time before signing with Toronto. 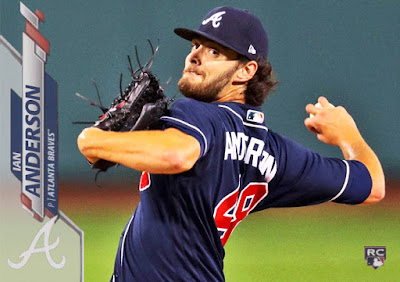 Card #275- Ian Anderson, Atlanta Braves
Friday we had a lot of cards of rookies that haven't had stellar 2021 seasons. Ian Anderson is not one of those. After becoming a crucial starting arm for the Braves in the regular season, with a 1.95 ERA and 41 Ks in his first 6 starts, Anderson got his first two career postseason wins, and a 0.96 ERA, over three playoff series, as well as 24 beautiful postseason strikeouts. And Anderson is having another phenomenal season so far this year as well, with a 4-1 record in his first 9 starts. Though many sportswriters, including me, worry about Anderson's wrist motion leading to imminent Tommy John, he's still a fantastic pitcher and a gift for Atlanta's struggling rotation this year. 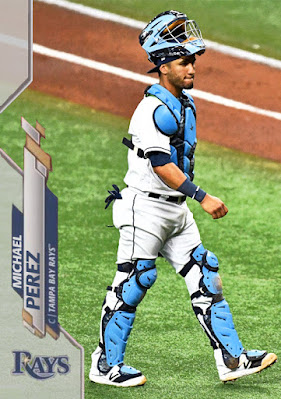 Card #276- Michael Perez, Tampa Bay Rays
In the absence of Travis D'Arnaud, and Mike Zunino's better numbers, the primary starting catcher for the Tampa Bay Rays' playoff year in 2020 was...Michael Perez. Perez came up in 2019, during the period where absolutely no catcher on the Tampa payroll could stay healthy, and was a decent replacement for the oft-injured D'Arnaud. In 2020, he was in the spotlight more, having the better defensive catching numbers than Zunino but still failing to hit higher than .200, despite 13 RBIs. He did hit .286 in the postseason, but was used only as a defensive sub in the World Series. Perez would later be waived by the Pirates, where he has continued to hit in the .100s. 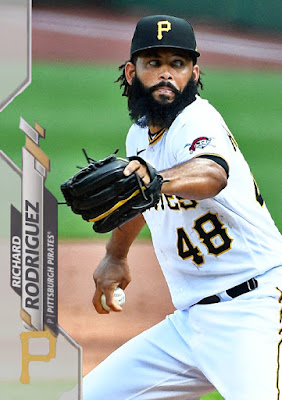 Card #277- Richard Rodriguez, Pittsburgh Pirates
Speaking of the Pirates...how the hell did Richard Rodriguez not have a card in 2020 Topps? Rodriguez has been one of the best relief assets for the Buccos since 2018, and was relevant enough in 2019 to garner some cardboard representation in 2020. But...not the case. A shame, since Rodriguez' 2020 season was another really strong one, with a 2.70 ERA and 34 Ks in 24 appearances, with 4 saves to boot. It would be a preview of Rodriguez becoming the primary closing option in 2021. 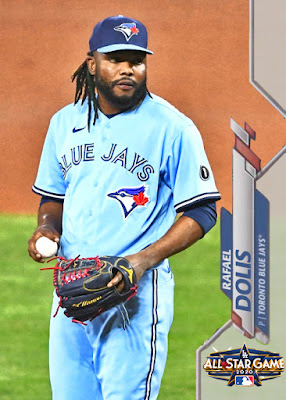 Card #278- Rafael Dolis ASG, Toronto Blue Jays,
Dolis is the second of two players in this 2020 Final Edition set to have both a base card and an ASG card, the other being Jeremy Jeffress. Something about relievers. Anyway, Dolis' scorching season in Toronto would have been enough for the AL to have him on their ASG squad as a reliever. Dolis' 2020 was an excellent comeback season, and it's a pity that he's been struggling so far in 2021. 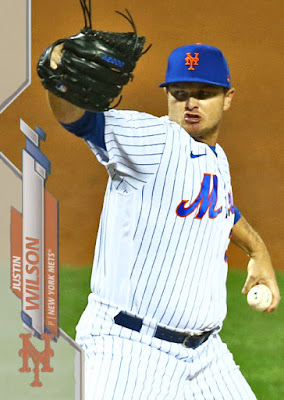