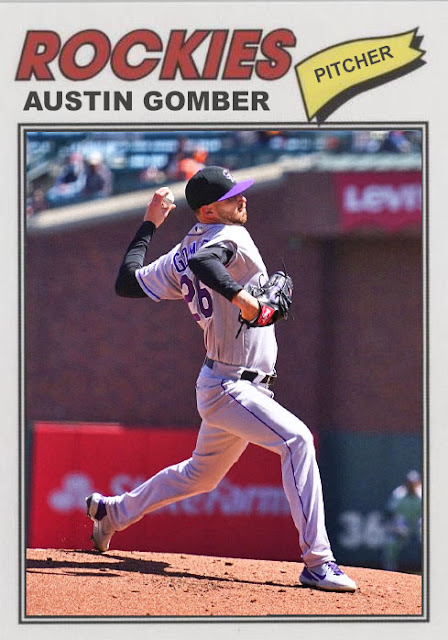 The 2021 Rockies, remembered for having kept Trevor Story, German Marquez and C.J. Cron...yet still just being a non-entity for the rest of the season much like the first-half. Of all the teams I've had to write about this year, this one might be the most blah. What's going on with the Rockies? They're not bad enough to be in last and they're not good enough to be anywhere near the Padres. They just kinda...hang there.

And look, even with Nolan Arenado gone, the team is still consisting of a man chunk of the main youth movement that made this team a contender previously. Marquez, Story, Gray and Freeland, they're all still there and performing. But the next stage of the team is stalling slightly, and not doing as much lifting as they are. McMahon is having a banner year, Brendan Rodgers is starting and thriving, and Sam Hilliard has 8 homers, but...a lot of guys like Alan Trejo, Dom Nunez, Josh Fuentes and Garrett Hampson are just...kinda there. Backpedaling slightly.

And now the piecemeal quality of the team is beginning to pitch in on their behalf. Connor Joe has somehow found himself a consistent launchpad for his own success after bombing out of San Francisco a few years ago. Joe has 7 homers and 25 RBIs in 49 games, and has become a bench success at 28. Elias Diaz has gone from a Pittsburgh backup to a Colorado starter, and has provided decent defensive numbers. And while he's not exactly as good as he was 10 years ago, Jhoulys Chacin found his way back to Denver and has become a viable relief option for them.

The season's got a month and a half left in it, there's not a ton left for the Rockies to do except get by, win a few more tough matches, and finish with a slightly dignified result. It's definitely not a marquee year for the team who's never won a division title, but it's also nowhere near the dregs.

Coming Tonight: Infielder for a team whose season started at 'bad but at least watchably bad' and is now at 'someone please get me out of here'.