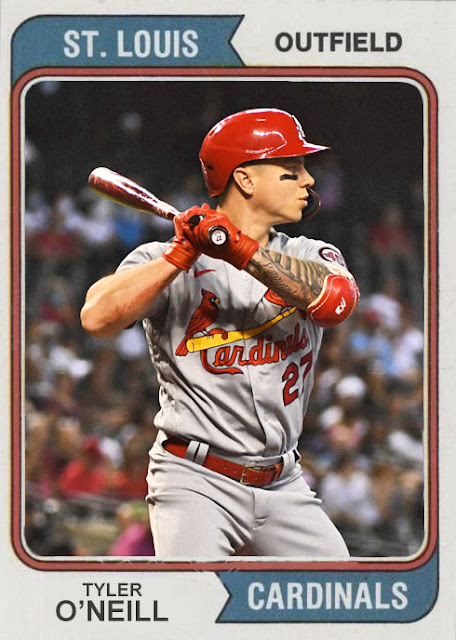 It is happening, again.

No, not the Yankees getting clobbered by a last-place team. Nor the White Sox making a decision that could have been avoided if LaRussa had just left well enough alone. The other thing I yell about on this blog a lot.

Yeah. The Cardinals are trying to compete again. And they're hell bent on it.

In the last week, they've went out and gotten Jon Lester and J.A. Happ to bulk up the rotation [which still includes Wade LeBlanc, for those keeping score]. Martinez and Flaherty are out for a while, we're down to Wainwright, Kim and LeBlanc, so now Lester and Happ are here to ensure that nobody in the rotation is younger than 32. Cause that'll work.

They're doing this because they're 3rd in the NL Central, a hair over .500 [as I write this, though they're currently being battered by the Braves], 3.5 games behind the Reds and 10 games out of first. But because they have such an insane lineup, led by Tyler O'Neill having his best season to date, Goldschmidt and Arenado in great form, and Carlson, Edman and Bader coming through as huge lineup presences, they think they can compete. It's theoretically possible, they're only a few games behind the Mets, so they're still in the top half of the NL race in general.

But they have a lot of obstacles in their way. Right now, the NL Wild Card race is locked up by the Padres and Dodgers, and will be indefinitely unless anything goes wrong. Behind them is the Reds, who the Cardinals have also struggled to get past. And currently passing the Cardinals in the wild card race are fellow hopefuls the Philadelphia Phillies. Again, a lot has to happen for them to break in, but they're on an upward slope thanks to a really strong rotation, something the Cardinals are lacking now thanks to Lester and Happ.

I just don't see how the Cardinals get a Wild Card spot. They've resorted to nefarious tactics before, but I don't know if even those are in the cards this year. There's a chance they could usurp the Reds and Brewers for the divisions. It's very possible. I don't want it to happen, nor do I think it's COMPLETELY likely, but...stranger things have happened. I'm bracing myself for disappointment like usual, but logically...this team won't make it past third.

Coming Tonight: A rare closer for a lower-tier team that still pitches for it.