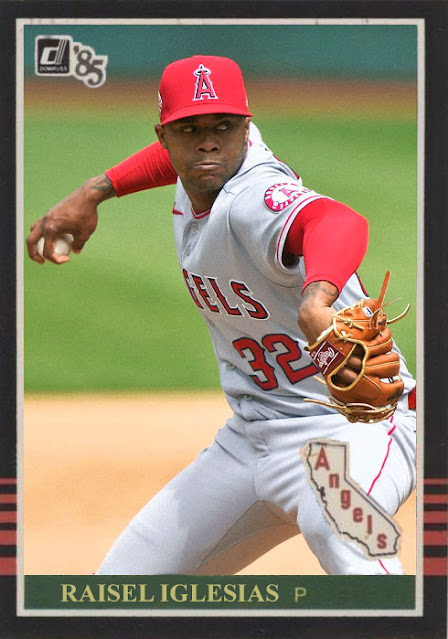 Right now, there are a lot of all-timer closers active. Craig Kimbrel, Aroldis Chapman, Kenley Jansen, Mark Melancon. A few others that could be all-timers if they keep it up, like Edwin Diaz, James Karinchak and Josh Hader [though I'd be a bit more reassured if he got the vaccine.]

There's also a lot of closers who are good in spurts, in fleeting moments, for stretches of time. I put people like Ryan Pressly, Liam Hendriks, Ian Kennedy, Greg Holland and Alex Colome into this category. Not career closers who work the ninth every year for 15 years. Guys who work the ninth for a period of time and are great for a few years, but aren't for a few more.

But rarer still is the okay closer. The closing pitcher who has a ninth inning gig for a while, has some 20 to 30 save seasons, and never really becomes huge. I would put people like Todd Jones, Antonio Alfonseca, Robb Nen and Roberto Hernandez into this category. And Raisel Iglesias. He's been a closer since the mid-2010s, getting between 28 and 34 saves in the past few seasons, but averaging 1 to 2ish WAR.

And...look, the decision to make Iglesias a closer definitely came from the Reds trying to recapture the magic of Aroldis Chapman the year after he left. So the fact that he lasted as long as he did, and is still running, as a closer is pretty great in itself. This season he's got 22 saves and 73 Ks, in his first season in Anaheim. He nearly got traded but managed to stay on the team and gets to keep his job for at the very least another month.

But also, Raisel Iglesias is a very human closer. He blows 5 or 6 saves a year, has an ERA around 3 or 4ish, and has some human moments in between great saves. It's not like Jansen or Kimbrel where he's just on fire for insane stretches. He CAN be...but for the most part he just kinda chugs along. He's been doing this for middling teams for 7 years now, the stakes have never been too high, but he's never been godawful, either.

And I don't know how much longer he can keep this going. He's 31, he's played for 7 years, maybe he has 3 or 4 good ones in him. But I don't know if he breaks big in the next few. I don't know if he's got the arc for it. I do hope he gets to have ninth inning privileges for as long as he can, though, cause he's a nice asset to have, especially if you're the Angels and you've had bullpen trouble for a bit.

The Angels may not accomplish much more this year outside of Ohtani's run, but I'd love to see Iglesias break his season saves record of 34. Would be pretty cool.

Coming Tomorrow- Another player I was expected to get traded that didn't, one of many in his home city.