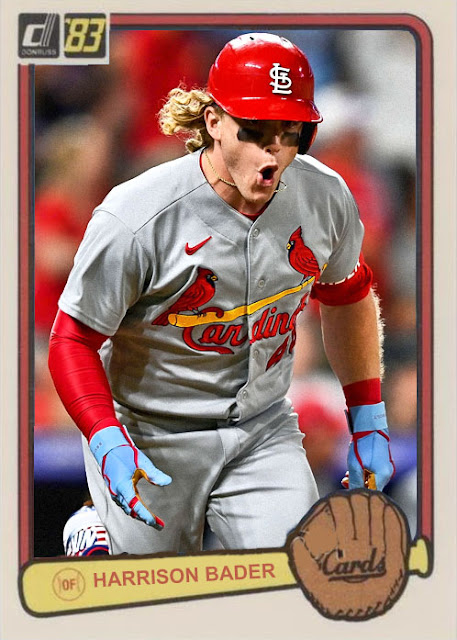 I forget sometimes that since 2016, with the exception of the 2019 season, we're kind of in the midst of a rare Cardinals playoff drought. They've never had any, like, truly bad teams in this period, and have only finished as low as third, but still have yet to finish a season below .500, and this dates all the way back to 2007.

And though the team got J.A. Happ and Jon Lester at the deadline, the Reds and Brewers are far enough ahead, as are the Dodgers, that the playoff certainty for the Cardinals seems lower than ever. Which is kind of weird considering...a lot of the pieces they've been working hard to develop are all kinda aligning right now.

Like, it's been hard to get Tyler O'Neill, Harrison Bader, Paul DeJong, Tommy Edman and now Dylan Carlson and Lars Nootbar all on the same page, but...pretty much all of them are doing well. Edman and O'Neill have had the best seasons, but Bader, Carlson and DeJong are doing well enough. Bader has recovered mightily from an injury and is still a defensive standout. DeJong's average is still too low for my standards but is doing pretty well, even with Edmundo Sosa leering over his shoulder for the position. Carlson's cooled down since May but he's a great outfield piece. And Nootbar is slowly heating up despite being a backup piece right now. He's projected to be a star soon, and maybe next year he'll be a league-wide name.

Really, what has failed this team has been the pitching. The only consistent presence in this rotation has been the now-40 Adam Wainwright, who's been having a beautiful season with a 2.97 ERA and 13 wins. Kwang Hyun Kim just got back off the IL and is doing well enough, but Flaherty's injured, Martinez is struggling, Mikolas is only now healthy and good again, LeBlanc's injured, and Hudson's out for the rest of the year anyway. At the very least, J.A. Happ has been very sharp in 5 starts, but Jon Lester clearly doesn't have much left. And as good as Alex Reyes is in the ninth, the rest of the bullpen is a little scattered thanks to injuries and a lack of too many hammered-down presences.

So, really, the Cards have been let down by the pitching, and are letting a great lineup year go to waste. I'd feel a bit more sorry for them if they weren't the Cardinals.

Coming Tonight: Speaking of teams that probably won't make the playoffs, a staff ace climbs back towards greatness as his team inches away from it.