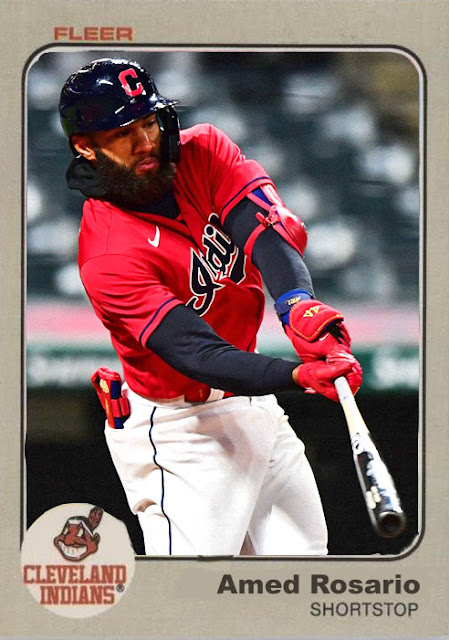 Last year, the Cleveland Indians had 0 players named Rosario. Last month they had two. Now they have 1. So they've made progress, at least in that department.

Amed Rosario is also currently healthy, which can't be said about Francisco Lindor, who was traded for him. So by that account, he should be playing well. And...he kinda is? He's hitting .276 with 34 RBIs, and a team-leading 109 hits. It's his best season since 2019, where he hit for average with the Mets.

But, the problem with this Cleveland team is that Rosario, along with Jose Ramirez and Franmil Reyes, is one of the few trusted presences left in this lineup. Everyone else is just scattered. Andres Gimenez and Owen Miller are struggling in rookie campaigns. Oscar Mercado and Harold Ramirez are making decent but not perfect outfield auditions. Bobby Bradley and Josh Naylor were closing in on starting positions and then got injured. New additions like Myles Straw and Wilson Ramos have at least been productive through early appearances. But still, the team is very disorganized and not on the same level. There's remnants of previous factions of the Indians team, like Bradley Zimmer and Roberto Perez, still hanging about. Further, the rest of the season, they're gonna be without Francona. It's completely fractured.

At the very least, the rotation is better off. Plesac and Quantrill are getting stuff done, and at the very least Triston McKenzie can strike people out. I worry about the inexperience of guys like Eli Morgan and Sam Hentges, but maybe they'll be alright eventually. And then Clase and Karinchak are awesome bullpen pieces, and they'll be good for a bit. So the pitching is at least less of a problem. But now the Indians only really have Jose Ramirez as a selling point. Shane Bieber will get back when he gets back, but without him, there's really only Ramirez to denote this team.

I wonder what this team is going to look like for the rebrand. The big marketing push is gonna be 'because we have a new name, all of these things about us are new', and for that to happen, a lot of what made this team so meh is gonna need to change, and work better. You can't lie and say 'oh we're fresh and different now that we're the Guardians'. You have to put the work in. And I hope they do.

Coming Tomorrow- I owe this team a debt of gratitude for beating up the Braves last night. And I owe their first baseman a lot for still being elite even into his late 30s.