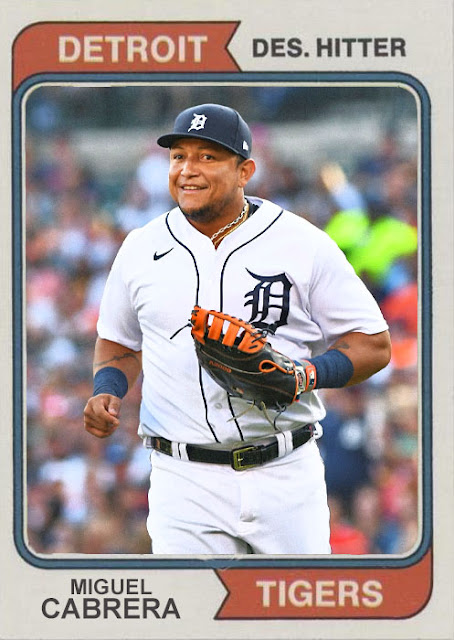 Miguel Cabrera. He just passed 500 home runs, he's 39 hits away from 3000, is clearly a future Hall of Famer with no stock left for the next few years, and a perennial DH spot for a team that isn't good enough to upgrade.

This is the gig with him, as it has been since 2017. He's Miguel Cabrera in name only, and while he'll give you some homers or RBIs, he's not the all-around player he was in 2012. The Tigers are used to it, the fans are used to it. At this point it's just nice to still have Miggy in the lineup everyday, from the perspective of 'he's a legend, that's nice. By contrast, Albert Pujols has become a nice bench bat in LA, Joey Votto is still riding his midyear hot streak, and Max Scherzer is still an integral piece for the Dodgers. These players have all pretty much punched their tickets to Cooperstown, and they're still delivering to some extent. But Miggy...is just sort of sliding by, doing his thing.

Maybe it's the environment as well. While this isn't a BAD Tigers team, especially compared to what they've done recently, it's certainly not an inspiring one either. Right now it's the signed veterans, like Jonathan Schoop and Robbie Grossman, who are doing a lot of the work, as a lot of the younger, homegrown players, like Harold Castro, Willi Castro and Derek Hill, try to figure things out. What I will say, compared to a lot of other years, is that I can see a future youth movement beginning to form, and that Casey Mize, Tarik Skubal, Akil Baddoo, Eric Haase and Gregory Soto are acting as a subtle backbone around this team. There's still a lot that needs to fall into place, and there are people like Zack Short, Isaac Paredes and Daz Cameron who need to figure out how to hit at the MLB level, but there's more going on here than there has in recent years.

I do worry that the insistence of Cabrera's presence in the lineup for the next few years will keep the team from competing. Torkelson's a couple years away, no doubt, but a lot of these working pieces right now point to a better 2022, and potentially eclipsing Cleveland in the standings. Will they be able to do that with a subpar DH? It's really down to Cabrera and how he feels about where the team's going. He could always request a trade to a competitor to clear things up, even if I pity any competitor that'd have to pay the last few years of that contract.

I'm glad I have this many good things to say about this team, but we're still squarely in the middle in terms of quality.

Coming Tomorrow- An outfielder for a team that seems to have finally accepted that they may not, in fact, be competitors this year.