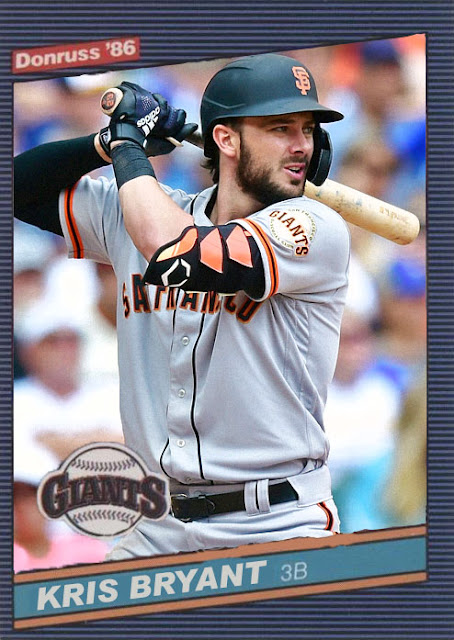 I was worried when Evan Longoria was activated that the Giants' lineup was about to become too crowded, especially as Bryant was beginning to take flight. But then Longo went right back on the IL, 3rd base was clear again...and Bryant had the road paved for him.

I am very thankful that Bryant seems to be on the same tear he was in Chicago while playing for the Giants right now. The deadline has slowed some people down, including Adam Frazier and Ian Kennedy, and Bryant is still hitting for average, delivering RBIs, and being a decent defender anywhere they put him. He also, you know, gets to be in the same lineup as Posey, Crawford, Ruf and Yaz. Which is also definitely a plus.

And that's honestly why the Bryant move is paying off so much for this team. The Giants are already the #1 team in baseball, and now they have Bryant continuing to cement this fact.

This team has like FIVE guys that can play a number of places and still come off the bench. Bryant, yes, but also Darin Ruf, who they can play at 1st and the outfield I guess, and is..of course, having another awesome season since Korea fixed his swing. AND you've got Wilmer Flores, whose bat is also working pretty well in his second season SF, and can play all around the infield [and is only 29, that fact surprised me]. Plus, now you have LaMonte Wade, who's been getting a ton of reps in the outfield and has been coming into his own with 17 homers in 74 games. Annnnd you've also got Tommy La Stella, who's healthy again and can play all over the infield.

That is so much versatility. And that's not even counting those other outfield pieces like Duggar and Slater and Dickerson who all swap in.

This team has...so many moving pieces, so many potential directions. AND. AND. If Posey goes on the IL again, they bring up Joey Bart, it all falls into place. If things go wrong, injuries and whatnot, in the next month or so, this team has so much damned security that I'm not scared for them. Granted, I'm not even sure this team will even have a 30-home run guy, which is odd for a first overall team, but...they're doing so much else right.

I hope the good fortune continues. The Giants are the ultimate overdog right now. This doesn't always bode well for teams. So hopefully they can make something work this year.

Coming Tonight: I'm at a beach house in Manasquan, NJ. I was last at this part of the shore in 2018, the summer where a hard-hitting first baseman we'd traded Giovanny Gallegos for began making a name for himself. He still is.