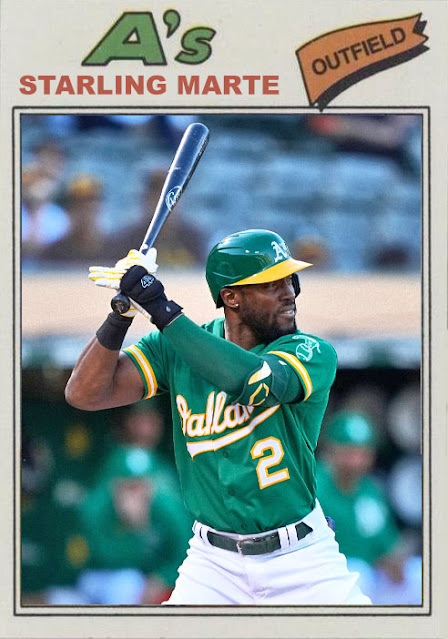 And just like that, the Oakland Athletics have closed right in on the Astros, are a game and a half behind them, streaking like mad...and playing the last place Rangers this week. This is good. This is very good.

I don't think there's been a single unlikable A's team this decade, because even when they're pesky and wild card chasing, they're still not the overbearing, formidable, toxic gatekeepers of the division. That's more like the Astros since 2017. The A's have just had really nice teams, and have either slid into the playoffs or not bothered. Last year they finally had a postseason victory [in an expanded playoff scenario], and this year they're looking for similar results.

The big thing is that I don't think anybody across the league has done as well as the A's did since the trade deadline. Pretty much everybody they got has been excellent for them. Most obviously, Starling Marte. He was having a great season in Miami, the Marlins traded him to Oakland, he's been hitting .415 in the 12 games he's been here for. This is career form for Marte, and he's the exact outfield presence the A's need to cover for the now-suspended Ramon Laureano. Plus, both Yan Gomes and Josh Harrison are hitting in the .280s and upwards, and are both great upgrades from Sean Murphy and Jed Lowrie. Harrison is thankfully back to his Pittsburgh high points, and Gomes is still an excellent everyday catcher. Plus, Andrew Chafin's scoreless in 7 appearances. That alone is impressive. Next to everyone else it feels minimalist.

And the rest of this team has just truly come together. Manaea-Bassitt-Irvin-Kaprielian-Montas is a very strong and very impressive rotation all around, Lou Trivino has made the ninth his own, Matt Olson's still having a career year, Canha and Chapman are still crucial lineup pieces, and Tony Kemp and Seth Brown are excellent bench bats. There's so much versatility in this team, and there's only a skeleton crew really of charter members, meaning they've hit upon a lot of good combinations and they can cruise on by with this combination.

The A's look very whole and very powerful right now, which is also how the Astros looked before the deadline. The difference is that the Astros dropped two pieces at the deadline that are now helping other teams, Myles Straw and Abraham Toro, while the A's picked up pieces to fix the team. So I'm really hoping the A's pull through and land that playoff spot.

Coming Tomorrow- Out of nowhere in July, his bat caught fire for the first time in several years. I bet he's glad this isn't Phoenix.