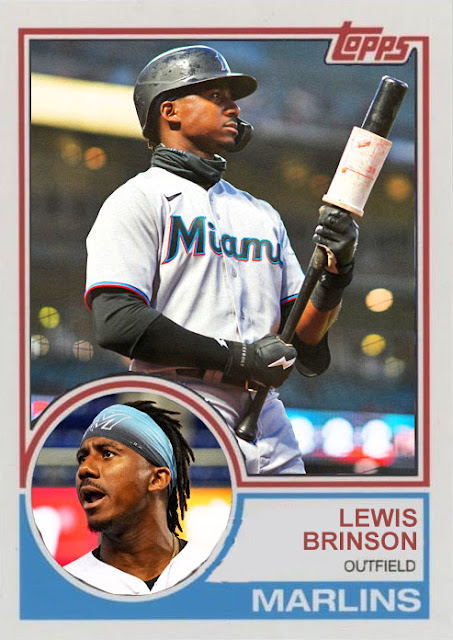 Well....it looks like the Marlins won't be making the playoffs again this year.

I'm not saying that the expanded playoff was the only reason the Marlins made the playoffs [look how they still took out the Cubs last year], but it certainly looks like it rewarded a fairly decent middle of the road team at the right time. They had the momentum, they had the lineup in line, and they were winning games even without Marte active. And it was the kind of bet, like the 2019 Nationals, that wasn't going to sustain itself.

And now we're in 2021, and Garrett Cooper's on the 60-day, Trevor Rogers is out on a personal issue, the entire starting outfield from this season is gone, and Anderson and Alfaro are struggling after strong years. This is not the team, and it's become abundantly clear. No matter how hard Alcantara, Aguilar and Rojas try, it's just not gonna happen this year.

Regardless, Lewis Brinson has been starting a lot more games. In past years, this was cause for alarm, as Brinson would refuse to hit for average, and has been struggling to live up to what the Marlins saw in him when they traded for him in the Yelich deal. Brinson was very similar to Trent Grisham in that he had a brief audition with the Brewers before being traded, but while Grisham has found himself in San Diego, Brinson is only now beginning to hit for average in Miami. He's got a .260 average, 7 homers and 25 RBIs, and he's got the best non-Aguilar OPS on the team. So clearly he's figured out how to hit in Miami, and he's definitely earning the starting duties...but, at 1.0, this is not only Brinson's best season, WAR-wise, but his only season with a WAR higher than 0.1. So many years of missed opportunity, and while it's paying off...it's still coming very slow.

I dunno, maybe a huge season is on the way for Brinson. But I didn't really think the Marlins would wait this long for results. Now that you mention it, they're still waiting on Isan Diaz as well, but at least his excuse is injury-related.

The Marlins at least have Zach Thompson and Bryan de la Cruz to light things up for another month or so, but they have every right to be disappointed. I don't know if this crew can make it to another postseason, and a lot of work might need to be done to even entertain the thought.