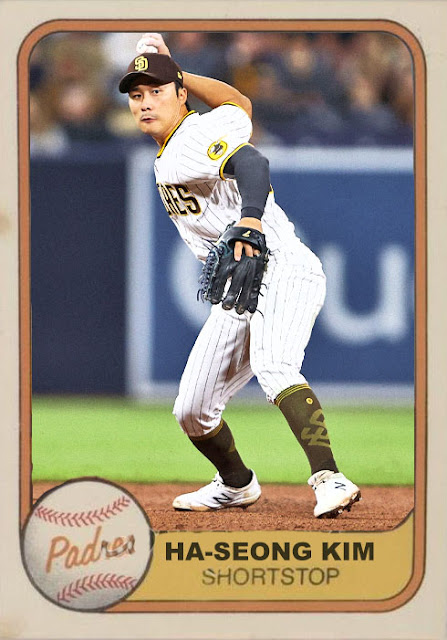 Lost in the shuffle of the no-hitter the other day was the fact that Fernando Tatis Jr. works in the outfield, leaving Ha-Seong Kim room to start. Which means the San Diego Padres now have flexibility at catcher, 2nd base, shortstop, and most of the outfield. Regardless of their current place in the standings, that is honestly dangerous.

Ha-Seong Kim probably isn't a good enough hitter to be a Rookie of the Year candidate, but like Evan White last year, he's a very impressive defensive player with great numbers at shortstop and great positional versatility. I initially thought the Padres were being silly picking him up and confusing the infield situation, but it's adding flexibility. Jake Cronenworth is taking more reps in the outfield now that Adam Frazier is here, and Frazier can also play back there. It also brings on Wil Myers as more of a bench bat, which he's sort of become anyway.

The flexibility isn't quite spreading to the pitching, even with the addition of Jake Arrieta. With Darvish on the IL, along with Lamet and Paddack, the Padres are trying people like Miguel Diaz and Reiss Knerr as starters, with differing results. Knerr could be a rotation piece, but he's still acting like a bullpen piece. There's the option of promoting Mackenzie Gore, but even someone like Daniel Camarena would be a safer bet right now. Hopefully Arrieta can provide better work than his last few Chicago starts, and bring this team forward.

The bullpen, at the very least, is worth it. Melancon's still killer in the ninth, Hudson's been solid in his first few appearances, and Stammen, Hill, Johnson, Pagan and Adams have been uber-sharp. I do worry about Matt Strahm, who's been shaky in his first few appearances back, but for the most part the pen isn't the source of problems right now. Nor is the lineup, honestly, especially with Tatis back and his bat still on fire.

I just worry about this team continue to be the third option in the NL West thanks to the pitching, and to keep tottering along in the third spot. The logic says that this could come down to a Dodgers-Padres wild card game, and honestly I don't know who to bet on there. The Dodgers will pitch Buehler, the Padres will likely pitch Darvish or Musgrove, and it'll probably come down to which alliance can find a crack first. And after this week or so, I don't know if that's the Padres.

I could be wrong, they could shock everyone. But I'm not convinced yet.

Coming Tonight: Took him a while to get off the IL, took him even longer to heat up. But he's back, and he's hitting well.