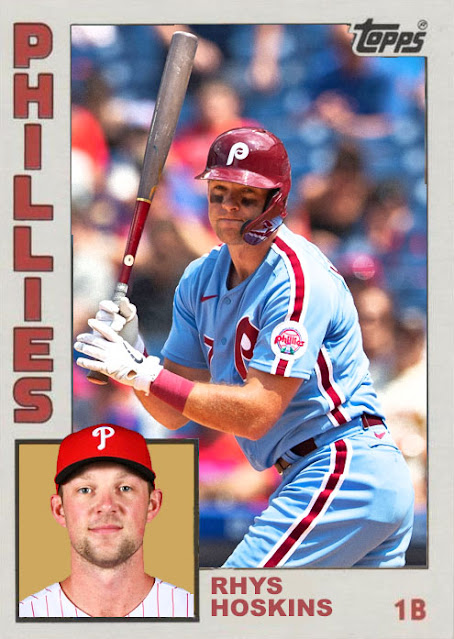 Ladies and gentlemen...the Philadelphia Phillies are in first place...in August 2021. None of you are on any hard drugs, so it must be just me.

Look, I'm just as stupidly optimistic about my Phils as anybody around here, but never in my wildest dreams did I think we'd spend any time in first after May. I mean come on, the Mets have the momentum and the luck, and they have DeGrom. What chance do we have?

Well...right now, the Philadelphia Phillies have a major MVP candidate in Bryce Harper, and a major Cy Young candidate in Zack Wheeler...and despite that, still have a lot else going for us. The bullpen is in much better shape than it was last month, with Ranger Suarez working as an opener, closer and middle reliever, Archie Bradley gaining ground and getting back to his old tricks, J.D. Hammer being scoreless since his call-up, Neris improving mightily in middle relief, and Ian Kennedy finally figuring out how to notch a save without giving up any runs. I worry about Philadelphia ruining Kennedy's season like it did Brandon Workman's last year, but that last save makes me think the tide is turning for him.

Also, how about Kyle Gibson? I knew he'd give us some tight material, but he's been phenomenal in his first two starts, with 2 wins, 8 Ks and a 2.13 ERA. He's managed to hold onto his Arlington material and fit right into the schematic with Wheeler and Nola. Wheeler, by the way, had a phenomenal shutout start yesterday [on Halladay's retirement day, no less], and is impressing me more and more as he goes.

As for the lineup...Ronald Torreyes and Brad Miller are excellent bench bats, Nick Maton and Luke Williams are great utility reinforcements, Travis Jankowski has been a surprisingly awesome fill-in for Cutch, Hoskins is hitting and playing well, Herrera's in a good place, Realmuto and Segura are still elite, Didi's heating up, and Bryce Harper's playing like we signed him to. Harper has been hitting like crazy recently, making an inside-the-park home run a few weeks ago, stealing bases, and feeling like an absolute hero. I love it, let's keep it going.

I'm very worried about the Braves, they're 2 games behind and similarly heating up. However, their outfield is very patchwork right now after the deadline, and I'm still trying to find their playoff hook. They've been blah all year, why act like a competitor in August? That used to be Toronto's thing.

Still, even if this is short lived, I love that this Phillies team made it to 1st, and I love how fun this team can be when they're hot. May they keep it going for even longer. Please.

Coming Tonight: I don't know how it's possible to overshadow this guy, but Carlos Rodon and Lance Lynn certainly have tried to this year.