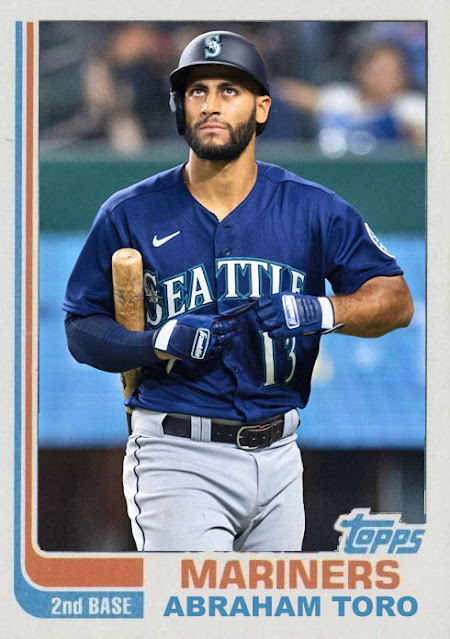 The Seattle Mariners are at the very back of the Wild Card race, behind the Blue Jays, Yankees, A's and Red Sox. This week, the A's and White Sox play each other, and the Yankees and Angels play each other, in tense battles to either eliminate or legitimize a wild card threat.

Meanwhile, the Mariners get to play the last place Rangers followed by the first place Astros. So as good as they'll be feeling in a few days, they're gonna really need to hold onto that feeling on the way to Houston.

There's really no way of sugarcoating it, the Mariners are a good team that are severely outmatched by all other AL competitors. There was never going to be a place for the Mariners in the hierarchy this year, even if the AL Central was gonna have the divide between the Sox and everyone else like they have. There's room enough for four serious Wild Card competitors, and also the Mariners...who've just gotten very lucky as of late.

Abraham Toro struggled to fit into the Astros lineup for two years, then once he was traded to Seattle his bat caught fire, hitting .344 with 8 RBIs in 18 games. He's slowly edging out Dylan Moore as the starting second baseman, and making a big name for himself as someone who was always outshined by the Astros, but always talented enough to be there. That's kind of what the Mariners have become, a haven for great players on hard-to-breathe teams. Joe Smith has been scoreless in 8 appearances as a Mariner, and Diego Castillo has slid right into the 9th successfully.

This is also a team that's still carried by big guns like Yusei Kikuchi, J.P. Crawford, Ty France and Mitch Haniger, who are all healthy and all helping out in droves. I'm so glad Kikuchi and Crawford have come into their own, and I'm so glad that Haniger is healthy and hitting. Without Kyle Lewis, Evan White, and Jarred Kelenic's average, there's still too many holes in this team for them to really be taken seriously, but if all three of those join the initial few in surging next year, a run is certainly a possibility.

It just sucks that now their postseason drought is probably gonna turn 20 this year. They've just had too much rotten luck, and even a better-luck year like 2021 is still probably gonna end in heartbreak.

Coming Tomorrow- They just got no-hit, but their star shortstop has moved to the outfield, meaning one of the best defensive tools of the year can now play everyday.