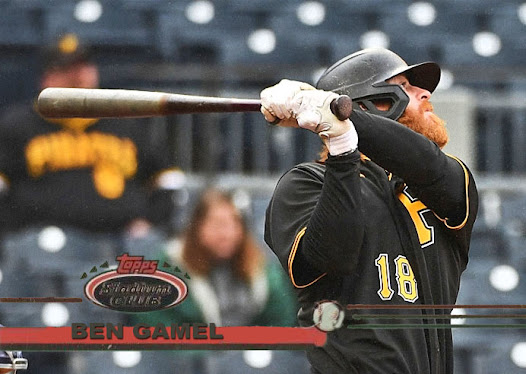 It's August, and my best choice for a Pirates custom is Ben Gamel. That should be your indicator, folks.

The Bucs are officially bank in tankville. Frazier and Rodriguez are gone, Polanco's gonna be gone fairly soon I reckon, and the emphasis will be on growth and rebuilding for the next several years. So right now, there's a lot of replacement players running around and thankful to get any playing time whatsoever. Ben Gamel was a bench guy in Cleveland this spring, now he's getting more playing time, hitting in the .260s, and playing well enough for Pittsburgh, but maybe not well enough for a competitor. And that sums up a lot of people on this team. Colin Moran's hitting .278 but he can't play defense. Kevin Newman's a great defender but he's hitting .220. J.T. Brubaker leads the team in strikeouts, but has a 4-13 record.

And yes, while there are players doing very well, like Bryan Reynolds, Ke'Bryan Hayes and Jacob Stallings, the team is so spread out and insignificant otherwise that it doesn't really matter. The Pirates had TWO All-Star starters this year. That's gonna be a trivia question someday. Way under .50, starting Frazier and Reynolds. Yes, Frazier was gone in a month's time, but they primed great performances, even in a climate where great careers aren't sustainable. Steven Brault, one of the longest tenured Pirates besides Polanco, is finally healthy and playing great. It makes you think about what a career he'd have if he had been healthy the last few seasons. Would he even still be here?

And so we follow people like Yoshi Tsutsugo, Dillon Peters and Hoy Park, snagged in trades and waiver deals and just thankful to have a place to play. Peters has been strong over the course of his first few games in Pittsburgh. Tsutsugo is hitting as well. But these are only temporary players, to fill the void until trusted farm pieces come up. I wonder who'll be the replacement players once they're traded.

It's a very bleak time in Pittsburgh, sad to say. This team doesn't have a lot left to do, as they've already got a high draft spot, and they aren't gonna lap Chicago anytime soon. So hopefully there are some fun personal highlights ahead before they wrap things up.