Cutch Ado About Nothing 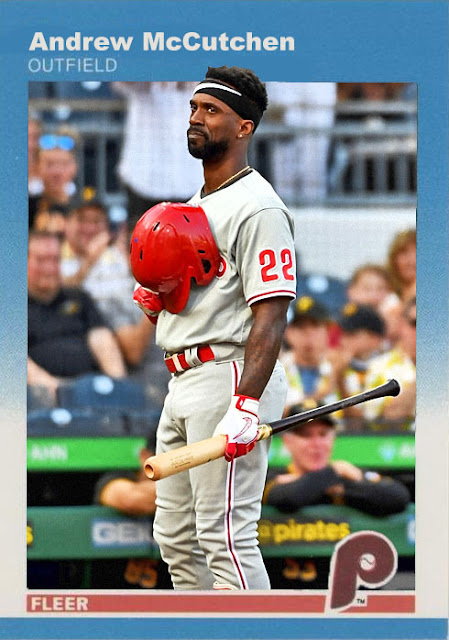 This is the last year that I get to see Andrew McCutchen, one of my favorite players, suit up for my hometown team. There's a chance he'll re-sign for a one year deal. It's a moderate chance, but knowing how things work out, I'm prepared to lose him as much as I am prepared to get him back. We got lucky with Didi. Cutch is a different animal entirely.

So here's what is absolutely true about Andrew McCutchen's first full season in 3 years. He's hit 21 home runs so far, his most since 2017. He's hitting .220, which is looking like a career low for the usual .280 hitter. With 6 more RBIs, he'll top his 2018 total and be a bit closer to his career peak. He's clearly not the elite all-around player he was in Pittsburgh, but he's also been a much-needed low-lineup bat that's kept things along for the team. He's not a complete disappointment, but he's not quite the guy he was when he came to Philly, which is a little sad.

But he is still hitting, and he can still hit for power, and that's something this Phillies team has been doing very well again. Aside from obvious power bats like Brad Miller and Bryce Harper, Rhys Hoskins just launched 2 the other day after getting back from the IL, Realmuto has a nice amount, and even Ronald Torreyes has 6. The team is still a few games behind Atlanta, but they're not quite out of it yet.

At the same time, the Braves do have a lot of upward momentum, a lot of new tricks thanks to the deadline, and a few less sources of infuriation than the Phils. The Phils still have serial disappointments like Andrew Knapp and Hector Neris hanging around. Ian Kennedy is slowly getting his ERA back down, but he's blown a lot more saves than he did in Arlington. Matt Moore and Ranger Suarez still make up the back of the rotation, and while they have been getting better, Moore still is not who he was with Tampa, and Suarez is still predominantly a relief piece. I guess he's the Phils version of Nestor Cortes.

I'm hopeful that the Phillies can make a push and lap the Braves, but...I don't know if we've got enough in the tank to be a formidable opponent for them. Then again, if this Yankees series does end up knocking them down to size, you never know..

Coming Tonight: The defending AL MVP. Surprise! He can still hit for power.