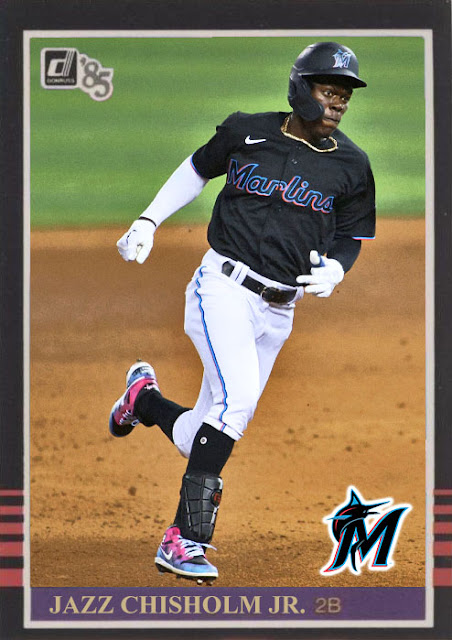 The Marlins. They traded away their entire starting outfield, and now have to start Lewis Brinson. I could end the post right there if I wanted to.

But no, the last-place Marlins, who are still one of the better last place teams out there but are still very dumb and one-sided, are trying to figure out how to retool themselves to potentially not be in last next week. Now that Marte, Dickerson and Duvall are gone, and Berti and Cooper are injured, the Marlins outfield now consists of the aforementioned Brinson, Magneuris Sierra and Bryan De La Cruz. One can't hit, one can't stay healthy, and one I've never heard of.

The rotation somehow stayed pretty intact, but Pablo Lopez, Cody Poteet, Daniel Castano and Elieser Hernandez are all injured, and Tyler Rogers is on leave. On one hand, you got a free replacement in Jesus Luzardo, in from Oakland, and he did get a win in his first start in Miami, despite giving up 3 earned runs. Zach Thompson has also stayed healthy, along with Sandy Alcantara, and both are doing pretty damn well. Ross Detwiler has also been alright in his starts, and Braxton Garrett is also a starting option. So it's held together kind of by staples. The good news is that the bullpen is still strong and Dylan Floro can save games.

And now Jazz Chisholm is healthy again, and after such a strong first few months, he's hitting like .232 in July and losing his once-.290 average. I do really like Chisholm as a player, and I think his early highlights were really refreshing. If he gets enough of a nice season going he could become one of the flashier, more memorable MLB figures right now. But...like most players in the bigs, he's swinging too often and having a duller average as we go. So, like a lot of this team, he's a bit too one-dimensional to be taken seriously.

The good news is that Jesus Aguilar, Miguel Rojas, Alcantara and Thompson and post-leave Rogers are still here, and doing well. This team doesn't have a heck of a lot else to do this year, but at the very least the power hitting and starting pitching won't cease too much.

Coming Tonight: More intriguing than the guys who left Minneapolis are the ones who stuck around. One of them is still making big moves.