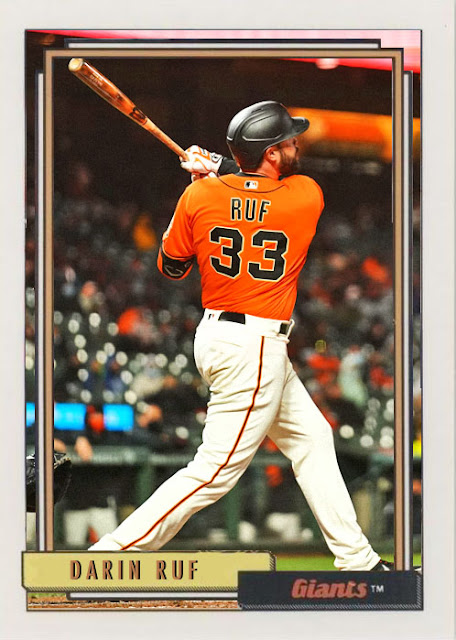 Darin Run hit more home runs in Reading in 2012 than he did in 4 seasons in Philadelphia. So honestly, I wasn't thinking much of the big guy after he left Philly. I filed him away with the other failed Phils prospects, like Domonic Brown, Cody Asche and Cameron Perkins. I had high hopes for Ruf, the prospectors were calling him a team-maker...granted, they also said that about Maikel Franco and Mickey Moniak, so what do they know, right?

86 home runs in Korea later, he returns to the big leagues, signs a minor league deal with the Giants, becomes their DH in 2020 and becomes a power-hitter for a 1st place team. What can I say except Philadelphia sure knows how to conserve talent.

Darin Ruf has found a place in the Giants' lineup as the backup 1st baseman, auxiliary outfielder, and occasional bench bat. He got a ton of playing time filling in for Brandon Belt at 1st, hitting .298 in 24 games in July, and so far hitting .353 in August. He's delivering the best offensive numbers of his entire career, and doing it for a team that, while it does benefit the older performer, is still outdoing two of the hottest teams going into the season. They're games ahead of LA and San Diego, and occupying the best record in the majors, and Darin Ruf's hot-as-hell midseason turn has only aided that.

Now that Belt is back, though, Ruf is probably headed for more of a bench position in the next few months, which he can totally do. It really speaks for how stacked this team is. Guys like Wilmer Flores, LaMonte Wade, and now the return of Tommy LaStella, are jumping on and getting things done. Kris Bryant has fit right in at third, in Evan Longoria's absence, and is also versatile enough to work just about anywhere, which is nice.

The one flaw I see for this team is the lack of a solid fourth rotation option in Anthony Desclafani's absence. We're looking at either Zach Littell or Sammy Long, which doesn't really compare to how Gausman, Cueto, Wood or Webb. Hopefully Disco's not out for long.

I still see the Giants being the alpha in the NL for a little longer. Eventually someone will have to dethrone them, though, and I'm guessing it'll be a fellow NL West competitor. Hopefully there's enough Darin Ruf bombs to last til then.

Coming Tonight: Last year he was cranking bombs for a World Series competitor. He could be doing it again without leaving the division.