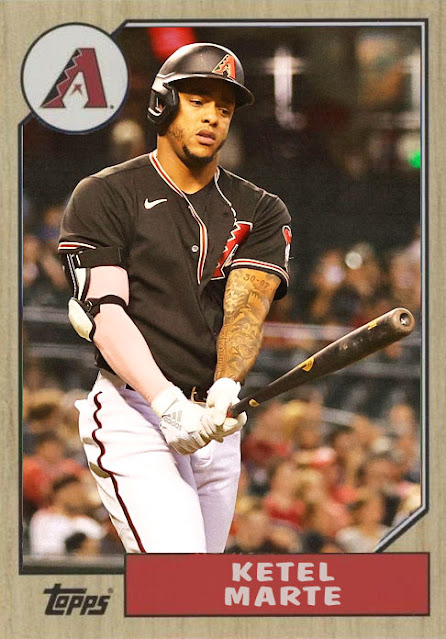 Two years ago, we were all calling Ketel Marte one of the premier infielders in the game, with such versatility and talent that we were all excited. Granted, Fernando Tatis Jr. was injured this season.

Now, after one slightly disappointing year and another injury-plagued one, Ketel Marte is kinda...just another guy in the NL West. He might even be the best player on the Diamondbacks, but I don't even know if he's the franchise anymore, considering that I don't know if the franchise even knows what it is anymore. He's still hitting .350 with 28 RBIs, but that's over 54 games. He missed a lot of time due to injury this year, and it set him back from maybe dialing further into the conversation this year. Tatis is looking like an MVP candidate, Javier Baez is rebounding with the Mets, Jean Segura, who Marte was traded for, is a Phillies hero, and Marte...uh...is playing lots of centerfield now.

It really boils down to the fact that the Diamondbacks don't have a hell of a lot to say this year anyway. I mean, they wanted to make heroes out of Zac Gallen, Merrill Kelly and Pavin Smith, and that hasn't really happened. Gallen has struggled at his team's expense, Kelly is a strong pitcher who just gets unlucky, and Smith is struggling to justify his hype. Same with Daulton Varsho, honestly. The best thing that can be said about this season is that two pitchers for this team scored hitless outings, and one of them was Madison Bumgarner. And even if Bumgarner's 2021 season has been an improvement, he's nowhere near the league-wide talent he was in SF.

At the very least, you can say that this team delivered fine seasons out of Tyler Clippard, Carson Kelly, Josh Rojas and, yes, Ketel Marte. But you can't say for certainty that people like Kelly and Merrill Kelly, or even Marte, will be around when this team competes again. Maybe Varsho and Tyler Gilbert will, but...it's not gonna be next year, exactly. I think that once the D-Backs figure out someone to organize this team around, and once they realize it's not always gonna be Marte, they'll be better off, and they'll rise in the standings. Until then, it's just gonna keep being as rough as this.

Coming Tonight: Some guy with a beard who throws smoke for the Rays.