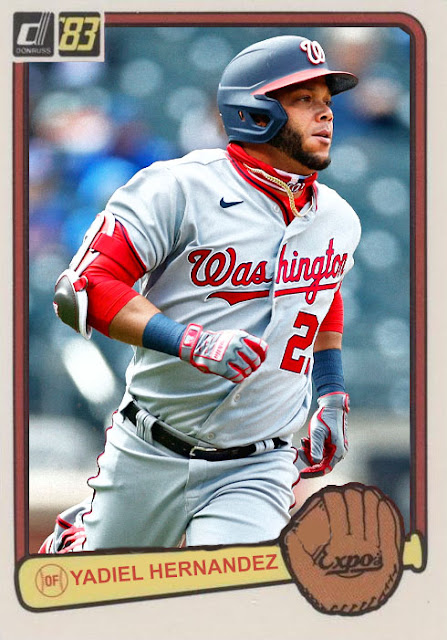 This just sums up the Nationals' season right here. I had a Joe Ross custom prepared for today, but now he's out for the season, and I'm gonna have to hold that custom til December, for Year by Year. And because so many people left this team at the deadline, I don't have many easy options to make a Nats custom for. So my best option was 33-year-old rookie Yadiel Hernandez.

Who is now a starting outfielder for the Nationals. That is where we're at.

I mean this with no offense meant towards Yadiel Hernandez, who's hitting .295 and is adding some versatility and contact work to this outfield in Schwarber's absence. But he's very much a replacement player, and this Nats team is just running on numerous replacement players right now. Instead of Trea Turner, the Nats now have Alcides Escobar, and even if he is, in fact, having his best season since 2015, he's still a fill-in player. Tres Barrera, Luis Garcia and Carter Kieboom have gone from backups to starters, and while at the very least Kieboom is finally hitting for average in the majors, how do they compare to Gomes, Harrison and Castro. And there's also perennial Nats bench man Adrian Sanchez who's been great in his first 9 games.

I will say that some of these rookies are raising some eyebrows in backup roles that wouldn't have existed without these trades. Josiah Gray now has a definite place to start games, and he's been excellent so far in 3 starts. Lane Thomas has only had a few at-bats since the Jon Lester trade, but now that he's got more room to prosper he's been hitting a bit more. Mason Thompson, the return for Daniel Hudson, has been strong so far in relief. The pieces that were MLB-ready are proving that they're ready to help the Nationals now, which means even if it's a bit until the next time the Nats get to compete, they still have pieces to use that aren't being plucked out of the minors early.

Coming Tonight: The team that broke through out of nowhere in April has fallen apart completely. This pitcher's doing all he can.