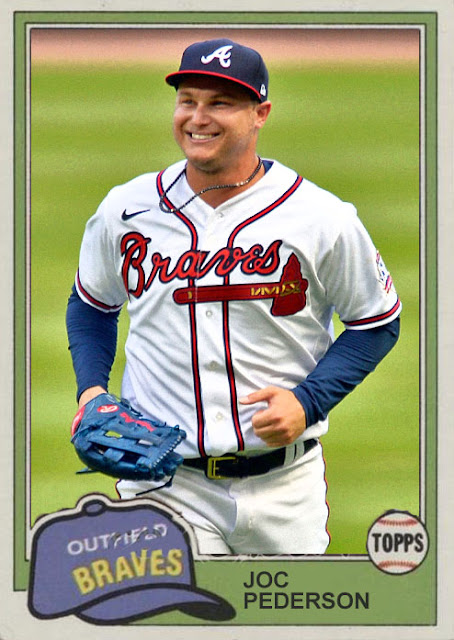 The Braves' push to bulk up their roster and pull together a competitive team is currently working. Joc Pederson is leaving the charge, delivering his best for-average work in years, hitting .267 with 13 RBIs and 3 homers in 26 games. Pederson was hired not only as a power bat, but as an outfield upgrade to cover for the loss of Acuna and Ozuna. So far he's been wonderful, and gave this team another great power hitter in addition to Freddie Freeman and Austin Riley.

Then Adam Duvall and Jorge Soler joined the charge. Duvall's been doing his usual low-average power stuff, but he still has 3 homers, which is still a plus. Soler has also hit as many homers, but is hitting a little better for contact, and has a .286 average. I think Soler is the better piece for the Braves, as Soler's numbers are an improvement from his KC ones this year, and he can be less hot/cold than Duvall.

Then you have Richard Rodriguez, a rare closing piece who won't be insulted if you don't play him in the eighth. He's pitched 8 innings for the Braves, hasn't allowed a hit yet. He honestly shows more control than the current closer, Will Smith, but I'm not sure if the Braves are ready to take the ninth away from Smith. Meanwhile, the bullpen at large, featuring Tyler Matzek, Luke Jackson, Chris Martin and Jesse Chavez, has been very strong and very underrated.

My one issue with this team is the continued barrage of starting injuries. We have gotten to a good combo of Fried-Smyly-Morton-Toussaint-Muller, but we've lost Anderson, Soroka, Ynoa and Davidson to do so. Thankfully Morton and Fried are in good form right now, but both have had more consistent seasons, and I worry about that heading towards a potential playoff push. There's no definite standout starting arm, like Folty or Soroka, that's worked in the past. Morton's the closest to that, but he's had human moments this year, same as Fried.

I genuinely don't know if this team has enough in the tank now to make a postseason run. If so, it'll be a lot less surprising than the press will have us believe, but it'll also be a lot less satisfying. The division was up in the air the whole year, and the team that takes it is the one that was supposed to all along, even with the torrid first half. I'm not saying the Phillies taking the east is the best outcome, but...[motions to everything].

But, regardless, the Braves could be kinda dangerous if they hit the postseason, and there could be a lot of surprise postseason heroes from this team. I doubt they're World Series ready, but I also said that about the 2019 Nationals, so what do I know?

Coming Tonight: They call him the Candy Man, and he doles out jawbreakers.