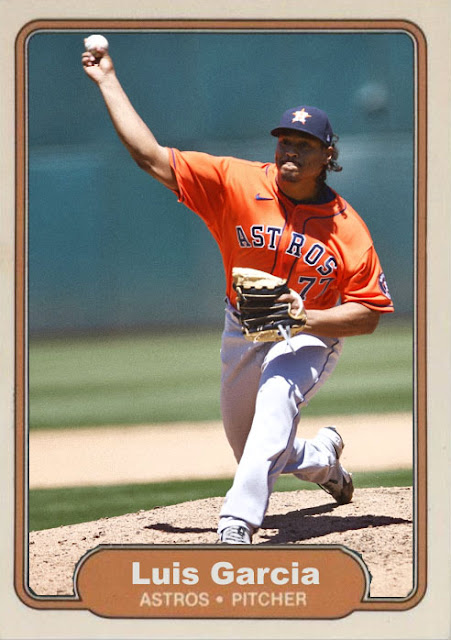 Okay. I'm gonna try to wrap my head around this.

We knew Justin Verlander wasn't really gonna be a thing this year. So the Astros signed Jake Odorizzi, hoping to add him to their rotation, which would thenceforth be Greinke-Valdez-Odorizzi-Urquidy-McCullers, with an assist by Cristian Javier upon injury. Five pieces that worked last year, a new free agent. You got your versatility, your security, your depth. Done, go with it.

So, uh...how the hell did Luis Garcia end up outdoing everybody not named Greinke in this rotation this year?

Keep in mind, Luis Garcia wasn't even really a factor last year. He appeared in 5 games, started 1, glittered by like a star in the night. He also somehow made a postseason start as a 2-inning opener in the ALCS, which was someone his only postseason appearance last year. And he was given the gig in April over Cristian Javier, and has started 22 games with 10 wins and a low ERA. Granted, Luis Garcia has proved his talents now, and is definitely worthy of the time NOW, but...wasn't this team's rotation already really complete.

Yes, injuries happen, and the Astros did go into the season with Urquidy and Valdez in multiple stages of injury-prone, but...I don't think they expected a 'sure, we'll start him once or twice' guy to be so reliable into the deep stretch of the season. The Astros seemed pretty complete, pretty well-rounded, and now a completely new variable comes out of the woodwork. And the Astros are still a first place team, even if logically Garcia could be considered a downgrade.

And that travels to the rest of this team. The Astros didn't especially need to give up Abraham Toro and especially Myles Straw, but they did. And then they brought up Jake Meyers, who no one had even thought about, and he's batting .300 with 11 RBIs in his first 17 games in the bigs, conquering the CF spot. So now we've got another potentially longterm piece to this team.

Credit where credit is due, the Astros farm system is amazingly well stocked, and keeps cooking up great pieces to the point where this team could stay competitive for at least another 5 years. On the other hand, these are the Houston Astros, and literally nobody wants them to be competitive. We have begged them, with litigation, to stop winning, and they have refused.

The Astros are likely to be a favorite going into the postseason. Again. Hopefully karma comes for them before they come for the Yankees.

Coming Tomorrow- In May, he was a star piece for a first place team. He still is, but for a different one.