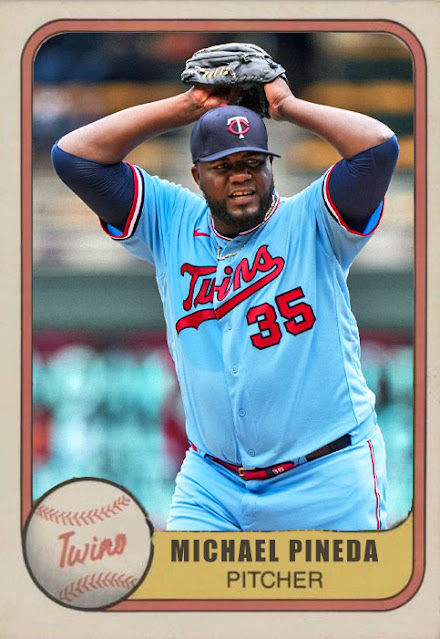 This is where we're at, folks. 2019, we were inundated with spectacular coverage of the Twins, and even the lower-lineup guys like C.J. Cron and Jonathan Schoop tearing them apart, and how awesome this team was and so on. 2021- well...Michael Pineda's still doing a decent job, isn't he?

That's where we're at. Without Jose Berrios and Nelson Cruz, and with Byron Buxton still injured, all the Minnesota Twins have to offer is Michael Pineda's 4-6 record, Miguel Sano's 115 strikeouts, a Rooker-Larnach-Kepler outfield that barely hits over .225, and competent players like Jorge Polanco, Luis Arraez and Josh Donaldson trying to save the whole thing.

The odd part is that the Twins were one of the few teams that didn't give up a great deal at the deadline. Donaldson was looking like a candidate, but he stuck around. Same with Buxton and Kepler. The Twins were actually getting a lot of offers about Michael Pineda, which...really? That 1.205 WHIP, 67 strikeout and hard-looking-32-years-old type? You want that? The shocker was J.A. Happ going, he was really struggling. But Pineda, whose numbers actually look great compared to people like Kenta Maeda and Bailey Ober this year, is actually one of the anchors of this rotation, and has enough decent numbers to keep things going. He's still imposing, and he's still craftier than the average fireballer. Sometimes he does get beat up, but he's still one of the more trusted options the Twins have right now.

The Twins are still trying to sift in a youth movement, but Ober, Griffin Jax and Charlie Barnes have struggled as starters, and Alex Kirilloff and Brent Rooker have bobbled MLB work. Nick Gordon was actually doing pretty well but he's been demoted again for some reason. The team is still very confused about what it wants to be, and while a lot of the strength may return for 2022, I'm not sure if this new core of younger players will really be what the organization wants it to be for a few years.

Coming Tomorrow- In 2015, he was 1/3rd of a breathtakingly huge playoff-caliber outfield. Now only he remains, and the team's in last. And he's struggling.