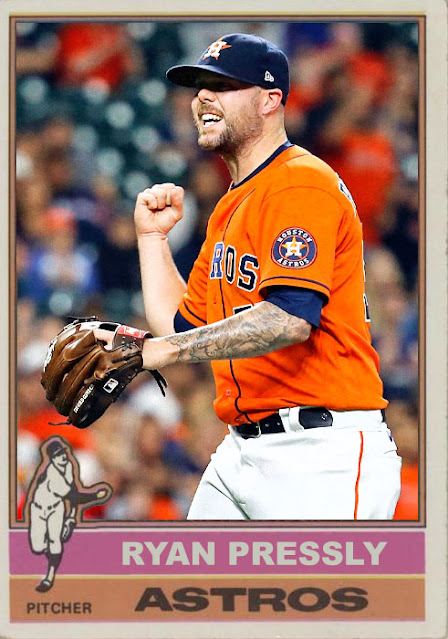 Let's check in with the Astros' bullpen, the one part of the team that hasn't exactly earned the overall hatred directed towards the team. They do their own thing, there's always been a nice unit or so, but for some reason a lot of the recent additions, like Andre Scrubb, Josh James, Bryan Abreu and Brandon Bielak, weren't really acclimating to this season as well as previous ones.

Already this season we've seen an All Star nomination for Ryan Pressly, which...he wasn't able to get in on due to obligations. Still, Pressly's been having another nice season, with a 2 ERA and 18 saves. Ryne Stanek has also been having a nice season, his first great numbers since leaving the Rays after being the chief opener there. Stanek leads the bullpen in Ks with 60. Blake Taylor and Brooks Raley have been alright. Cristian Javier has worked as a starter and reliever, and doing a lot more relief work recently, to great results.

But what really needs to be taken into account is the four new additions to the bullpen, cause they've all been coming off well so far. The weakest of all of them is Phil Maton, ironically the youngest of the four. Maton was traded for Myles Straw, who is doing well in Cleveland right now, one of two members of the Astros' bench that shouldn't have been traded. The other is Abraham Toro, who's hitting like hell in Seattle, and was traded for Kendall Graveman and Rafael Montero. Neither have allowed a run in 4 innings, but neither have made as much of an impact as Toro either [almost like that trade shouldn't have happened, as well]. Yimi Garcia has also been sharp in his first week or so in Houston. Garcia and Graveman were both working the ninth in their respective former teams, and now have to do middle relief. It's probably easier for Graveman, who was flirting with middle relief anyway this season.

Still, the bullpen is a solid unit now, and a good group of people that are mostly doing well. And I think it's okay to like them.

The rest of the team is beginning to slow down. A few recent losses, a few struggles in recent weeks. The A's are beginning to catch up, and may have gotten more fortuitous trade deadline additions. I think the Astros are still gonna be a factor into the rest of this season, but hopefully they slow down and let some other teams have big playoff runs this year.

Coming Tomorrow- Man, the Phillies sure know how to raise prospects...for other teams.