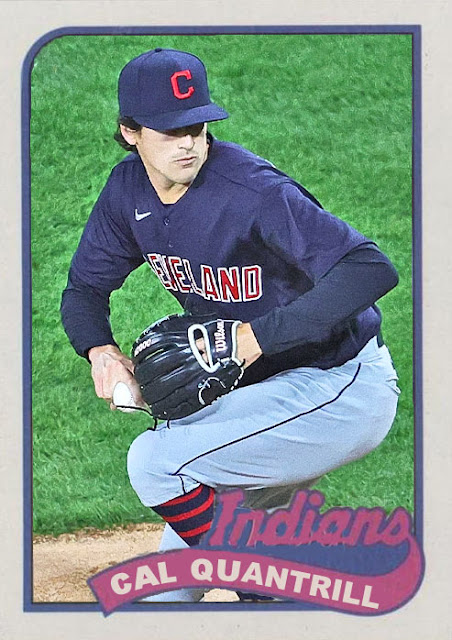 Kinda funny that the two members of the Indians' rotation to stay healthy most of the year were the two 2nd-generation guys. Plesac and Quantrill. Nephews and sons of former MLB relievers. Residing over a Bieber-less Cleveland rotation.

Honestly, Cal Quantrill's transition from swing/5th-starter type to one of the most integral parts of this team has been refreshing. The Padres could never figured out what to do with Quantrill, even with his impressive nature in the latter half of the 2019 season. Once he was traded to Cleveland, he still had some learning curve to go, but once he got the starting job midway through this season he was golden. In 16 games as a starter, he has a 3.44 ERA, 4 wins and 67 strikeouts, numbers also boosted by his equally impressive relief numbers. Quantrill is dominant, he is reliable, and he's been very tricky in his last few starts. If he's this good next year when Bieber, McKenzie and Civale are back, the Guardians' inaugural rotation might be pretty spiffy.

But, really, the injuries to those pieces, including Triston McKenzie going down right when he figured out how to stop runs, have slowed down this team to a barely efficient 2nd place competitor to the towering White Sox. The lineup is a backbone of its former self, with only Jose Ramirez, Bradley Zimmer and Amed Rosario persisting throughout. The good news is that Myles Straw is continuing his versatile work from Houston, D.J. Johnson finally seems MLB ready, and Blake Parker has been a surprisingly steady bullpen presence. But, yeah, this team's a husk of its former self, is no longer at competitive capacity, and may be looking at some rebuilding years to rely on Mercado, Clement and Bradley as they develop.

It saddens me that the AL Central ended up being such a wash, but the Indians were competitors for about half a decade, which is pretty cool considering how bleak things were in the early 2010s. Maybe they'll run again soon.

Coming Tomorrow- Even with more earned runs, he still wound up a part of the deadliest rotation in baseball right now.