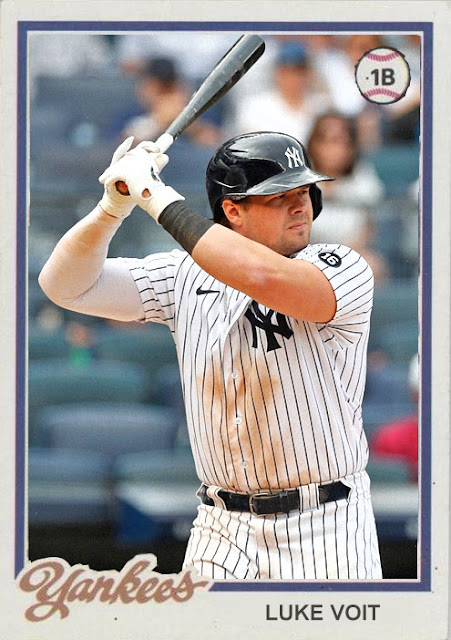 We traded for Anthony Rizzo, he went on the COVID list, and at that exact moment, the Yankees' preexisting 1st baseman made us regret it.

Luke Voit might be the most traditional power hitter on the team, even moreso than Giancarlo Stanton. Voit just...slams the ball wherever he wants. He has that power built up, and he just hacks things away and enjoys the spoils. If 2020 had been 162 games, I don't think that Voit would still have led the league in homers, but I think he would have gotten close. And even though he's missed a lot of time so far this year, he's come back at an opportune time and has caught fire, hitting .353 since the All Star break with 4 homers and 21 RBIs. Rizzo had a nice start but has petered off, and Voit has remained strong and consistent. So much so that the Yankees are starting Giancarlo Stanton, also hot as hell right now, in the outfield so that Voit can still make starts as DH.

The Yankees themselves have been riding some recent hotness as well, which I am overjoyed about. This team, which was .500 in July, has won 11 straight, riding on the success of Stanton, Voit, D.J. LeMahieu and Andrew Velasquez. The fact that they have kept streaking with the comparatively minimal rotation of Cole-Montgomery-Taillon-Heaney-Cortes is kind of eye-opening. Like, I don't think I would have called Nestor Cotres becoming a solid starter for us. Granted, the control-maneuvering use of Luis Gil is slightly suspect, but considering the lack of runs, I'm not complaining.

With the streaking and clobbering, it's easy to forget that the Yankees are still a wild card team, and still 4.5 games behind the Rays, who kept their lead strong by tossing around the Phillies this week. Plus, the Yankees have to play the A's this week- regardless of their slipping from the wild card standings, they are still a contender, and they still have some major pieces to work with. So I won't exactly be shocked if the streak ends relatively soon. But...the Yankees have established themselves as major contenders, even for the wild card race. I hope it all goes according to plan.

Coming Tomorrow- The big RBI-hitting pitcher dude that was injured for two months and is now back for the purposes of never allowing a Phillies team to compete apparently.