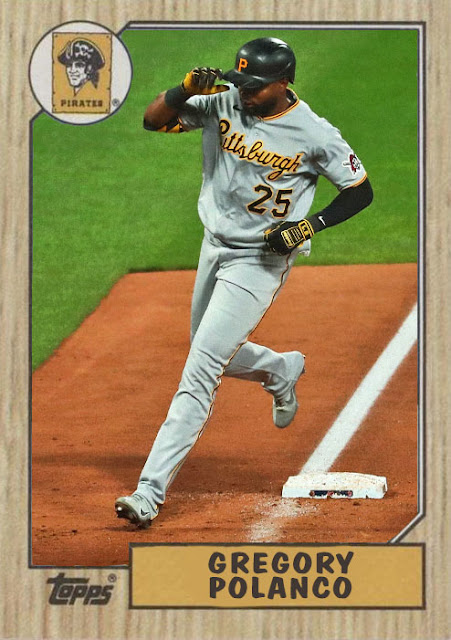 The slow, eventual inefficiency of once-prosperous Pirates outfield prospect Gregory Polanco is one of the most depressing baseball stories of the last 10 years. Because at its peak, that outfield of Polanco-Cutch-Marte was unstoppable. Cutch was the all-around contact star, Marte was the power bat, and Polanco was the speedster.

And the funny thing is, even 8 years later, Polanco can still steal bases, and has 13 on the season. But his batting numbers are shot. He's hitting .207 with 57 hits over 316 plate appearances. He leads the team in strikeouts with 90 [tied, admittedly, with Bryan Reynolds]. He is a few more dull seasons away from being the Chris Davis of this team, being an immovable slug, stopping the team from moving forward by keeping it behind. And yes, he can still have good days and can produce, unlike Davis, but...for what the Pirates entrusted of Polanco, he's barely delivered.

Meanwhile, you can kind of see hints of future accomplishments in this team. Bryan Reynolds, Ke'Bryan Hayes and J.T. Brubaker are all having great seasons. Prospect pieces like Hoy Park and Rodolfo Castro are beginning to filter in and make their cases for starting positions. Not only has Bryse Wilson impressed in an early start after the trade from Atlanta, but Steven Brault is looking good in his first start back from the IL. The most surprising factor is that the bullpen core of David Bednar, Chasen Shreve, Chris Stratton and Duane Underwood Jr. is doing really well, and reliable enough to rest most of the team on.

But at the same time, this Pirates team doesn't have a lot left to say this season. It's not like last year where they can bring up Ke'Bryan Hayes in late August and he can be their top performer. What can they do? Last night they got walloped by Cincinnati, and I reckon the next two months is gonna be full of a lot of games like that. I just hope that eventually they can figure out how to sustain a team, and have a playoff win. Cause I'd hate it to just be the mid-2000s again in Pittsburgh.

Coming Tonight: He could have been part of a sharp White Sox rotation right now if they hadn't have traded him for Lance Lynn.