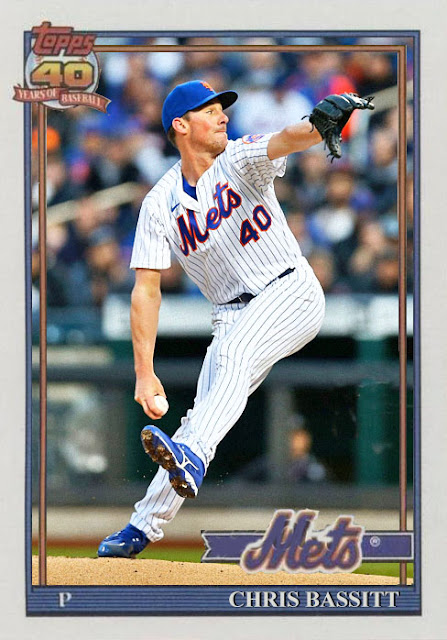 It's always gotta be a little trickier than usual with the Mets, doesn't it?

We already knew the Mets would be starting the season without Jacob deGrom, that's all doable. They start the season with a Scherzer-Megill-Bassitt-Walker-Carrasco rotation. Walker misses a few starts, they have David Peterson, it's fine. Then Megill gets hurt. Now Scherzer's hurt. So now the rotation consists of Chris Bassitt, Taijuan Walker, Carlos Carrasco, David Peterson and Trevor Williams. And it's still sort of a win for the Mets.

They still have an ace, and that ace is Chris Bassitt, and after he's been locked up for a little longer in Queens, Bassitt is very capable of mowing down batters, as he always has. So far he's 4-2 with a 2.27 ERA and 49 Ks, which is still a pretty powerful ace performance taking Scherzer out of the equation. The funny thing about Bassitt is he's 33, and yet has only really become a force in baseball since 2018, so he's making up for a lot of lost time. As is Carrasco, who's battled injuries the last few years, and is off to his best start in years, with a 3.73 ERA, 3 wins and 37 Ks. Walker has been the comparative weak link so far, at least in terms of velocity, but he hasn't exactly been counted out yet.

The other two are the intriguing bits, because the Mets aren't exactly out of luck. Filling in for Walker, David Peterson had a 1.89 ERA in 4 appearances, and fit right in with the rest of the bunch. I don't doubt he'll be fine. Williams, however, I'm confused by, as he's been problematic ever since his 2-8 2020 as the top pitcher in Pittsburgh. Williams has had only one true start, and it went well enough, going 4 innings and not allowing a hit, notching 6 strikeouts. His relief numbers are telling me he'll be in better shape as they go, and even if he is a bit faulty, he's still working with an excellent Mets lineup.

In addition to that, the Mets also have a sixth starter ready if they need him, in the form of Thomas Szapucki, who's been a fairly decent starter in Syracuse so far. So that's really what we're working with. Three Opening Day rotation members fall, there's four in waiting.

As for the Mets in general, they're not doing a ton wrong. Starling Marte just got back from a week away and he's already back to hitting. Alonso, Nimmo, Lindor and McNeil are all pounding the ball. Edwin Diaz is actually working as a closer again. Patrick Mazeika actually works as a backup catcher. Travis Jankowski has fully embraced being a killer bench player. The fans are showing up, the belief is there, and nobody else in the NL East is coming close to them. May they keep it up, at least for a little while longer.

Coming Tomorrow- He was within inches of getting dealt last year, and he's stayed around long enough to see his team retake first.