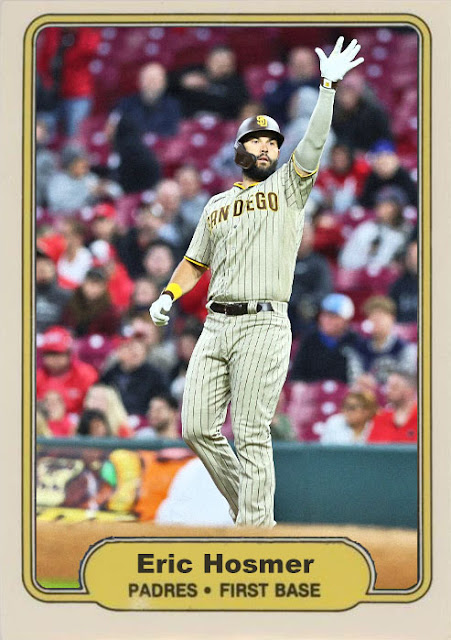 The best thing you can say about the Padres so far is that all the decisions you used to criticize them for are all paying off.

We were confused when they signed Eric Hosmer to a big deal in 2018, and now Hoz is having his best season in years, hitting .325 with 24 RBIs and a 1.5 WAR, his highest since leaving the Royals. This is a season it took Hosmer FIVE YEARS OF HIS EIGHT YEAR CONTRACT to get to. That is...something. Four years of perfectly okay baseball, teetering on the brink of negative batting percentages, and now a comeback for the ages to help out a team missing Tatis. I don't know how, or why, he does it, but...I'm glad.

It's not just Hosmer that's surprising the cynics who wrote off Padres moves. Jurickson Profar, after a weaker 2021, is having a huge year, doing some insane defensive numbers in left, and hitting a bit more than usual. This is the kind of season Profar would have at the end of his Rangers tenure, the kind he matured into. Two years after being signed as a backup, Ha-Seong Kim has become a handy, impressive defensive infielder, and has been doing a nice job filling the void Tatis has left, and fighting off competition from C.J. Abrams. I also think this team's ability to find players coming back from playing in the International leagues has been exemplary; Pierce Johnson is still a great bullpen piece, and now Nick Martinez has become a surprisingly strong back-half rotation member. Considering how many former Padres have made it to the asian leagues [Carlos Asuaje, Christian Villanueva, Freddy Galvis], it's only fair at this point for the asian leagues to return the favor.

As I write this, the Padres are a game and a half behind the Dodgers, and are looking pretty damn good overall. Darvish-Musgrove-Manaea-Gore-Martinez is a pretty strong rotation, and the fact that Musgrove's having the best season of all of them is pretty cool. Taylor Rogers is having one of his best seasons as a closer. Cronenworth, Kim and Profar are all excellent defenders. And Manny Machado is just as capable of leading this team as Tatis would be. This is a very cool 2nd place team that could lap the Dodgers if things go their way.

Who knows what could change, but this teams looks shockingly good right now. Kinda cool to see it.

Coming Tonight- Third baseman for a team that's taking on my Yankees this week.