Mr. Cortes if You're Nasty 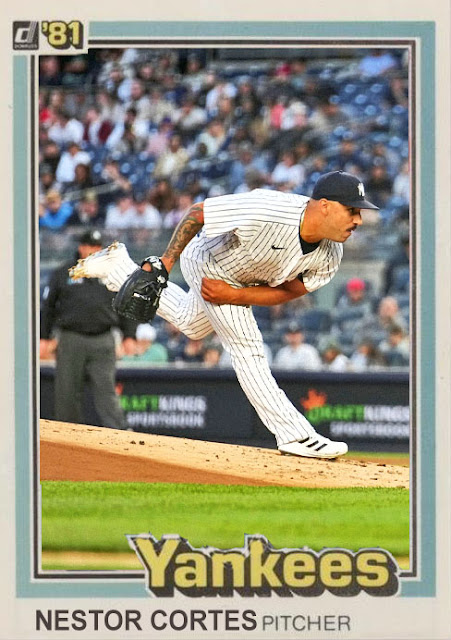 Here's why the 2022 Yankees are great in a way that the Yankees haven't been great in a while: there is a pitcher who is leading the team in strikeouts with 31, and his name is not Gerrit Cole or Luis Severino. That's right. Nestor Cortes has taken flight, and I could not be any more here for it.

I never had anything against Cortes before, but it always confused me as to why we were so gung-ho on him. First as a long-man in 2019, which he did decently, and then as a long-man turned surprise starter last year. And on one hand, yeah, Kluber and Taillon and all these people are injured, let's have somebody get reps, it's fine. But...Nestor Cortes was not a replacement pitcher last year. Pretty soon he just became another really good starter we had. Dude had a 2.90 ERA and 103 Ks in 93 innings. That's...that's pretty damn good. But even that didn't prepare me for those first few starts, especially the one where he had 12 Ks and no earned runs in 5 innings [and the Yankees still lost]. Like last year, I don't know how many actual wins he's gonna get because he only goes 5 or 6 innings every time and the shenanigans usually happen late, but when he's on the mound, he is a force.

And because of that 12-K day, he's coming out on top of a rotation that includes a solid Gerrit Cole year, Luis Severino reasserting his dominance without blowing his arm off, Jameson Taillon quietly having another great year, and Jordan Montgomery doing his usual solid work. This isn't a showy rotation, there's not a lot of OMG years, mostly because all of these guys are being really careful they don't pitch themselves into another injury, a sort of deGrom-addled fear sweeping the league now. But they're all doing really well, as is long-man Michael King, relief specialist Clay Holmes and closer extraordinaire Arodlis Chapman.

The lineup has also been stepping up, thankfully. Judge has as many homers as Rizzo [at least at the time of writing]. IKF and Donaldson are finally off to great starts as Yankees. Aaron Hicks is reaping the benefits of finally being healthy. Marwin Gonzalez has become a great bench bat. DJ is filling in all the holes like he used to. Stanton and Torres are heating up. Maybe it's the 11 win streak talking, but this team is looking very good, and very intimidating.

I do know that this team can get real cold as soon as it can get hot, and that the Blue Jays are waiting for an opportunity to sneak back into first and reclaim the conversation. So I'll just say that the Yankees had a wonderful April and are looking really good, and it's some energy I hope they can sustain for a bit longer.

Coming Tomorrow- Meanwhile, on the other side of New York, a contact hitting outfielder gets a lot of new friends.