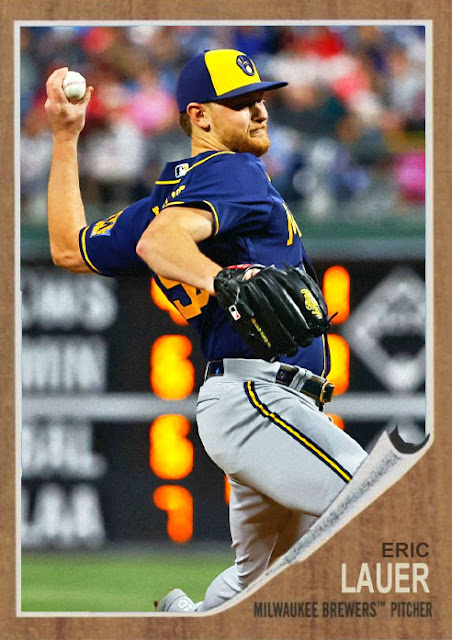 Last year, the Brewers' rotation was this massive hydra of three unstoppable strikeout artists just mowing anyone down that came before them. A year later, Brandon Woodruff and Freddy Peralta have ERAs around 5 despite having 30+ Ks each. So even if Corbin Burnes is still everything he's cracked up to be, things need to be slightly rethought.

Thankfully the Brewers not only have Eric Lauer, but they have Eric Lauer at 2019 levels of dominance. 2019 was Lauer's fullest season as a starter, and though he was let down by the 2019 Padres' run support, he still had 138 strikeouts and 8 wins. Since landing in Milwaukee he's been saddled with injuries, but last year in 24 games he had a 3.19 ERA and a 2.4 WAR. And so far this season, Lauer has been stellar, with a 3-0 record, a 1.82 ERA and 42 Ks. At 27, Lauer fits right into the age range of the rest of the rotation, between 26 and 29. So he's still very similar to pitchers like Burnes and Woodruff, even if he did come over from San Diego.

The funny thing, though, about the rotation being a little shaky outside of Lauer and Burnes is that the rest of the team isn't exactly suffering because of it. The bullpen's still pretty awesome, with Brad Boxberger, Trevor Gott and Devin Williams working on great seasons, and Josh Hader being lights-out in the ninth. The lineup has really come into its own, with Yelich heating up with 17 RBIs, Tellez and Adames notching back to back player of the week awards, Luis Urias coming off hot off the IL and Hunter Renfroe at the very least still being a trusted power bat. This team still has enough power and surprises to stay atop the NL Central without Andrew McCutchen.

And with the Cardinals still being after them, that's gonna need to be the goal. The Brewers are awesome this year, they have a very full lineup and a lot of versatility, but so do the Cardinals, and they can catch fire like nobody. The Brewers have been hot until very, very recently, and they need to figure out how to fix the starting pitching issues so they can keep the momentum going and stave off St. Louis.

Coming Tonight: We all thought he was done. But here he is, with another career season in his 40s.