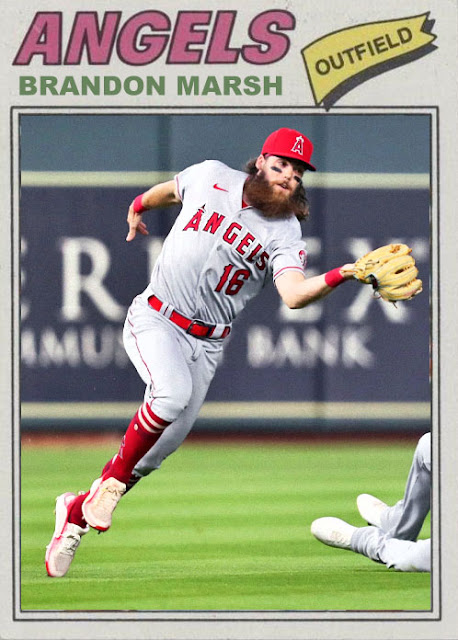 I think we finally have an Angels team that Mike Trout doesn't have to carry on his back to the finish line.

Yes, on one hand, it is a bit jarring to see Ohtani pulled from a game and potentially hit the IL. But at the same time...the balance we were waiting for in these past few seasons dragging along all those contracts has finally arrived. There's a balanced rotation, there's lineup variance, there's heroes in all sorts of places on this team. So much more interesting than simply 'Albert Pujols, Josh Hamilton and Justin Upton are here and none of them can do anything'.

So, for starters, Brandon Marsh is for real and has been a major help in the outfield. He's hitting .286 and has noticed 15 RBIs in 18 games. Already I knew he'd be something cool with his big beard and lineup presence, but he's leveled out into a decent contact hitter with power perks. Same with Taylor Ward, who's been trying to sneak into this lineup for years but finally seems to have landed with a .392 average [HIGHER THAN TROUT'S] and 5 homers [AS MANY AS TROUT]. And slowly Jo Adell is figuring out how to perform in the majors, getting his average up to .250 and rolling up the contact numbers. All this, another decent Jared Walsh season, Max Stassi being a solid everyday catcher at last, Anthony Rendon actually reaching to deliver again after 2019 and ex-Yankees Tyler Wade and Andrew Velasquez providing great defense...that's a pretty strong lineup, guys. And even without Ohtani, which is a possibility, you've still got mobility with the outfield and flexibility all around.

This is...what this team has been needing for years. It's even better considering that David Fletcher's hurt and the team has Velasquez ready to hop in and replace him admirably. There are so many solutions and great ideas coming, which makes sense considering this is a Joe Maddon team.

And the rotation, by and large, is working out. Detmers and Suarez need some work, but Michael Lorenzen is really working as a starter, Noah Syndergaard's craftier, less-hard throwing style is paying off, and lest I forget that Patrick Sandoval is just simply not allowing runs. This is a lot of upsides from a team that's had to play 'okay these three are injured again so which relievers can we have try and start?' a lot lately. I really hope this mentality lasts.

The Angels have been lucky enough to end the month in first in a division that features the similarly-competitive Mariners and also the not-to-be-counted-out Astros. It is some great opening luck, but there's still 5 months to go.

Coming Tomorrow- One of the rare 'we'll sign him and he'll be a star for us as we grow' signings that's actually really paid off.