Shadow of a Trout 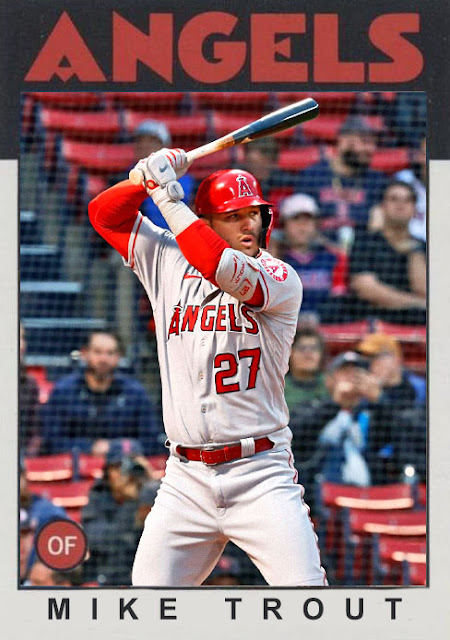 Only 5 MLB players who were drafted before Mike Trout in 2009 are currently active. 7 if you count two players injured for substantial periods of time. The Mariners, Padres, Diamondbacks and White Sox all picked outfielders before Trout. Two of the outfielders picked before Trout, A.J. Pollock and Randal Grichuk, had decent careers. But not Trout good.

For the record, a stat that could keep you up at night? If the Yankees never sign Mark Teixeira, then never give the Angels the compensatory draft pick they use to draft Mike Trout. Could you imagine that? If the Yankees decide to sign somebody else instead and the Angels don't draft Trout? Then the next team on the clock that needs CF help is the Red Sox. What a world that would be.

Regardless, here we are, Mike Trout is 30, he missed substantial time last season, we all hoped he'd be able to get a leg up on Ken Griffey Jr. by producing the one thing the Kid never could [a satisfying second act], and now he's giving us vintage Trout again. Hallelujah. 2.9 WAR through 40 games, hitting .319 with 26 RBIs and 12 homers, hitting figures already on par to match his 20-27 aged peak. And in addition, the Angels are in 2nd, the rest of the team is matching Trout in intensity [Marsh, Syndergaard, Ward, Ohtani, Sandoval and Rendon are all killing it], and the Maddon influence is actually aiding this team a great deal.

Here's the thing, though. The Angels are still behind the Astros for the division. Their next series are against competitive teams like the Blue Jays, Yankees and I suppose the Phillies, while the Astros don't get a team over .500 to play until mid-June. Between momentum, scheduling and the general fickle nastiness of the universe, the Angels, as good as they are right now, are being set up to fail. They're only a two game deficit between them and Houston right now, but as Houston plows through their series' with Seattle, Oakland, Texas, Kansas City and Miami, the deficit is gonna grow a great deal.

So the Angels have to figure out ways to match the Astros in intensity. The one thing the Astros don't have right now that the Angels do is, well, Mike Trout. The Astros have players who ARE good but none who will BE good even when time caves in on itself. Mike Trout, this season, is proving that he has enough in the tank to perform into his 30s, and is still an elite athlete who can hit, still keep a high average, and still run a season without breaking down. There's also so much more to this team this year, including a wider rotation, a huge arsenal of young performers, and some surprisingly awesome defenders. It is possible for the Angels to catch Houston. Not super-likely, but possible. And I hope they can.

Trout needs to get back to October in his prime. Maybe this is the team to bring him there.

Coming Tomorrow- Everybody going into this season thinking he was a disappointing contract signing can shut up now apparently.