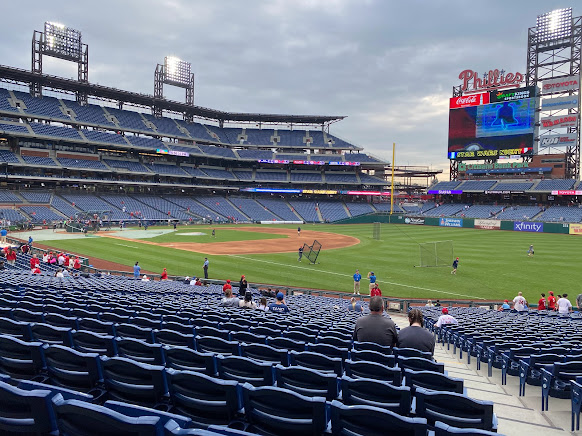 Last week, I caught a Phillies win against the Rockies on the third base side of the field. This week, I suited up for a Zack Wheeler start on the first base side. This one wasn't nearly as eventful, but it was Star Wars night, so at least it was cool.

I've been to a few Star Wars nights at CBP, they usually do a good job. Costumed characters roaming the place, a few fans in costume as the Mandalorian or Rey or Attack of the Clones-era Padme. The Phanatic raced in on his ATV to stop some imperial guards from destroying a Phils cap, and squirt gunned them all into oblivion. It was a nice night to be a baseball fan that moonlights as a nerd.

The game itself, an interleague match against the Rangers, came on the heels of a very sloppy Phils loss, and as we went towards a Wheeler on Martin Perez battle, I hoped that the team that had been so strong the week before would show up in greater numbers.

This was not the case. Despite some hits landing on the board on both sides, for the first eight innings, this game was very much a pitching battle. Wheeler had 7 Ks in 7.2 innings, even with 6 hits compared to Perez's 4; Perez went 7 strong with 4 Ks despite 4 walks. The biggest moves of the night came from defenses, like Rhys Hoskins making insane plays in the infield, robbing Brad Miller of a homer on one instance, or J.T. Realmuto making a wonderful throw to 2nd to end an inning, or, especially, every single potential Phillies homer in the later innings going right to Adolis Garcia. I mean every last one. They can hit so many other places, hitting dead to center a few feet from the wall isn't a great move if Adolis is gonna be there every single time.

One hit, however, nearly got away from them. In the 6th inning, after I'd gotten back from nabbing a personal pie from the Manco and Manco's stand they had at the park [for any Jersey Shore people, it's nowhere as good as the real thing in Ocean City, but it had a really nice crust], Nick Castellanos smoked a mammoth into the outfield, coming right to Kole Calhoun. It came just short of the fence but hit the awning before the field, and bounced back towards the grass. The initial review called it a home run. Then a minute later the umps were still conferring. Was it enough of a drive to count as a homer? It was not, and the umps rescinded the call and gave Castellanos a measly double, after which Harper ended the inning without much of a thought of scoring Castellanos.

The sole XBH of regulation was thrown out by umps. Get the robot umpires in here pronto, they would have called it a home run. 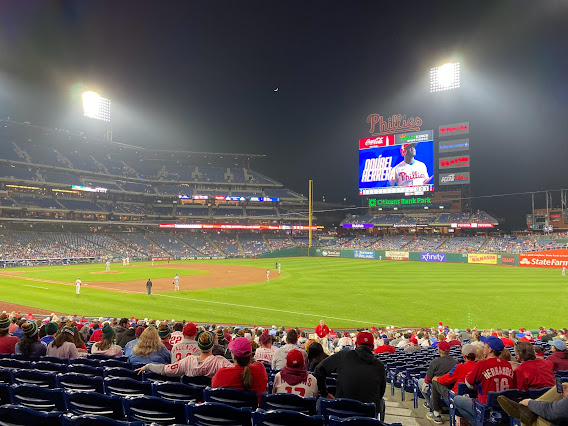 The game went scoreless into the ninth. Even bringing in Odubel Herrera and beginning to rough up Matt Moore seemed to be a futile effort. And then, with no one having accomplished anything to this point, we went into extras.

I don't know how often I've voiced it on here, but I'm not really a fan of the runner on second rule. I know Manfred loves it because it fixes his pace of play issues, but installing a pitch clock, robo-umps and maybe not messing with the balls every damn year will solve those more than just making extras a free for all. And that's what this was. Brad Miller launches a liner at the outfielders, they mistime it, and then two runners come home and we're putting all our eggs on the bottom of the lineup. Even if Roman Quinn could steal his way home, the game relied on an offense that wasn't there, and none of them could do anything about it.

The game ended with a disappointing 2-1 result, all of which scored by Manfred meddling. Thanks a bil, umps.

It was still a nice enough night for a game, there was a decent crowd and the defense made it sort of interesting. But compared to last week's, it didn't deliver near as much excitement. I'm due for another one in a month or so, hopefully that one is a bigger night.