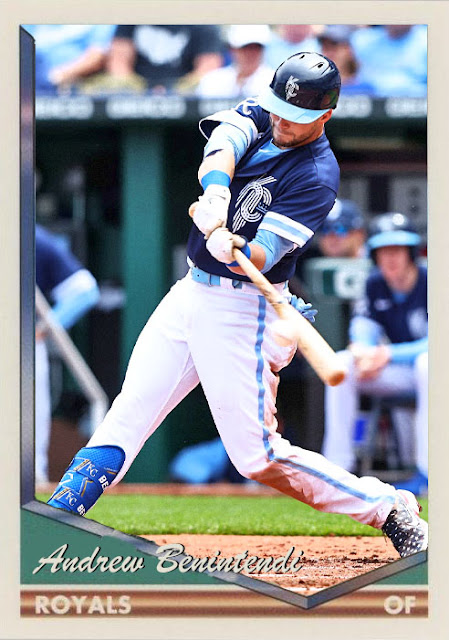 ...when 38-year-old Zack Greinke has a higher WAR than the rest of the team, you know the Royals are facing some dire times.

And it's not for a lack of putting the right people in the right place. You can corral Salvador Perez, Andrew Benintendi, Carlos Santana, Michael Taylor, Bobby Witt and Nicky Lopez and throw them on the same lineup all you want, but that will not guarantee that they'll all be great at the same time. I think that by the time Witt becomes an actual great player with a resume, most of the other people I just listed will have been out of the league for a bit. Not to discredit Witt, cause he's young and he's just figuring the majors out, but he's only hitting .211 and only has 10 RBIs. It's not...BAD per se, but...I think people were expecting more.

The good news is that Andrew Beintendi is not only hitting, but might be off to one of his best starts in years. The former Red Sox prospect is hitting .314 with 33 hits and 12 RBIs, which don't sound like much until you measure them with the rest of the Royals. Benintendi has always seemed like a great player who's fallen on bad luck, and last year he took longer than usual to acclimate to Kansas City, so it's good that he's ascending to a more optimal place for the Royals this year. I just wish the rest of the team was on his level as well.

The funny part is that the pitching isn't half bad this year, though. Greinke, Keller and Lynch are all pretty good starting. Garrett, Barlow and Taylor Clarke are doing well too. This kid Joel Payamps, who's been everywhere, is finally settling in somewhere, which is nice. There's a strong enough rotation, a strong bullpen. It's a shame nobody's hitting.

Will people eventually begin to come around and hit a bit? Not sure. It's gonna take a lot of people to snap into place at once. Maybe they lose Benintendi before they get Merrifield or Perez cooking. But hopefully it'll be somewhat of an improvement.

Coming Tomorrow- A pitcher for the Cubs who I worried was done after last year.