Don't Bring Me Down, Bruce 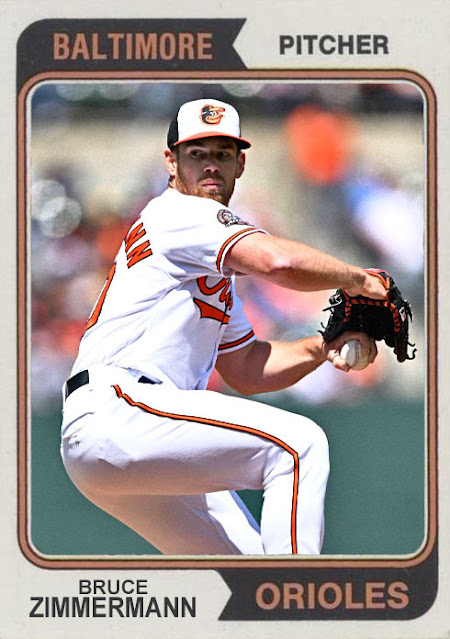 The Orioles, as people have predicted, have snugly ended up in 5th place in the AL East, but comparatively there's a lot of interesting things happening. The outfield combo of Mullins, Santander and Hays is still really powerful, and all three of them are off to nice starts, especially Santander. Jorge Lopez genuinely works as a closing pitcher, and is making up for a ton of lost time these last few years. Keegan Akin, Jordan Lyles and Spenser Watkins have had very nice seasons in various roles.

And...then there's Bruce Zimmermann. A Maryland native who was off to a decent enough start as a starting pitcher last season before an injury ended things 64 innings in. While I did think the O's would reach into some deeper places to find starters this season, especially once Means landed on the IL, somehow Zimmermann didn't cross my mind. And now here he is, with a 0.93 ERA, 21 Ks and only 2 earned runs, after 4 starts. The team needed an ace in Means' absence, and Zimmermann's been pretty close to that so far.

It's even crazier when you learn that the teams that Zimmermann has been so strong against weren't bad teams; the Brewers, Angels and Yankees twice have had to go through Zimmermann, and the Yanks only figured him out the second time around. If this is how strong he can be against competitors, then he could be responsible for a ton of Orioles wins this year, even with the circumstances stacked against this team.

The thing about this Orioles team that is going to doom them time and time again is that so many people on this team act as seat-fillers until the next wave of Baltimore prospects get here. The Orioles have Robinson Chirinos and Anthony Bemboom as catching options while they wait for Adley Rutschman to finish his rehab assignment. Tyler Wells and even Lyles feel like they'll be on some other roster by the time Grayson Rodriguez and D.L. Hall come up [Hall is literally on the 40-man as we speak]. Heck, Kyle Bradish is already up in the majors, and started a game this past week. And then as good as Jorge Mateo has been for the O's this year, you know he'll be backing up Gunnar Henderson in a year or so, which is a sad end for a guy who was once that can't-miss prospect for the Yankees and A's.

The team as is can't really accomplish too much, though taking away wins from Boston is always appreciated. I don't know when Rutschman, Rodriguez, Hall or Henderson will join this team, or if they'll change any of this, but there's certainly room for them. Hopefully someone like Bruce Zimmermann will still be at his peak by the time they get there.

Coming Tomorrow- A man who has started 83 games for the Marlins without being traded, which I think earns him a free baker's dozen at Krispy Kreme.