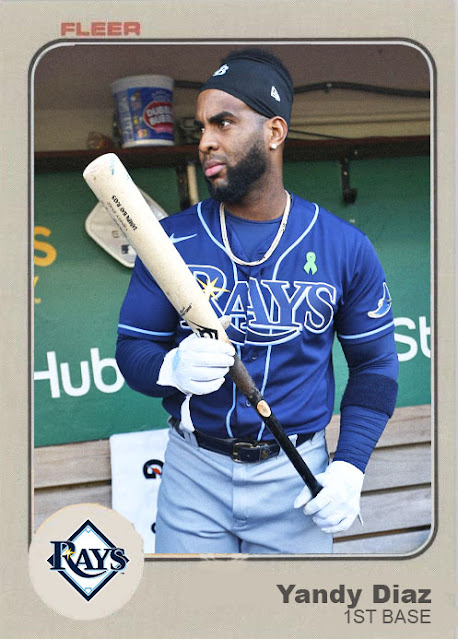 Between now and the end of June, the Tampa Bay Rays have to play the New York Yankees 9 times, including tonight. And unlike previous seasons...this year, I think the Rays know they're not as good as the Yankees.

They're not bad this year, let's be clear. They're still a strong second place team with great performances from longtime veterans like Yandy Diaz, Kevin Kiermaier and Manny Margot, as well as newbies like Shane McClanahan and that big rookie guy everyone's on about. But a lot of the guts of this team is missing this year. The Rays' penchant for keeping their teams below a certain budget cost them Joey Wendle, Austin Meadows and Michael Wacha this offseason, and their insistence on using younger arms predominantly in the rotation has led to so many of them, including Tyler Glasnow, Yonny Chirinos, Brendan McKay, Shane Baz, Pete Fairbanks and Luis Patino, out indefinitely with injuries. I equate this to a few years ago in Boston, where their entire rotation was out, and even if the rest of the team was great, there really was no point.

Now the difference between this Rays team and the 2020 Red Sox is that this Rays team still has some decent starting pitching energy. Last night, Ryan Yarbrough didn't allow any hits until the 6th inning, which was the point where I jinxed the no-hitter on social media and Marwin Gonzalez could smoke a hit off of him. The Rays also have two very strong young arms in Shane McClanahan and Drew Rasmussen, and a fairly decent season from Corey Kluber so far. What sucks, though, is that they still have too few starters to make a full rotation, and have to have Jeffrey Springs open games [a lot like he has tonight] in lieu of having an actual starter go 5. On one hand, we're in the era of baseball where starting pitchers don't need to go far into the game, but on the other hand it certainly helps when they do.

The Rays are really working with the same strategy as usual- low budget play, contact hitting, a superior bullpen. But the difference here is that with the strength of their competitors, small ball may not be enough anymore. The Jays are cold now, but we all know what happens to the Jays in June. The Yankees are still relatively hot and look to stay that way, even with the tough schedule load they have coming up. The Rays just may not have enough to really go head to head with these teams, and I think they're close to realizing it. Just having fun games, big moments and staying above .500 might be enough of a goal for these guys, I hate to say it.

How this Yankees series goes is gonna dictate how the rest of the season goes, I think.