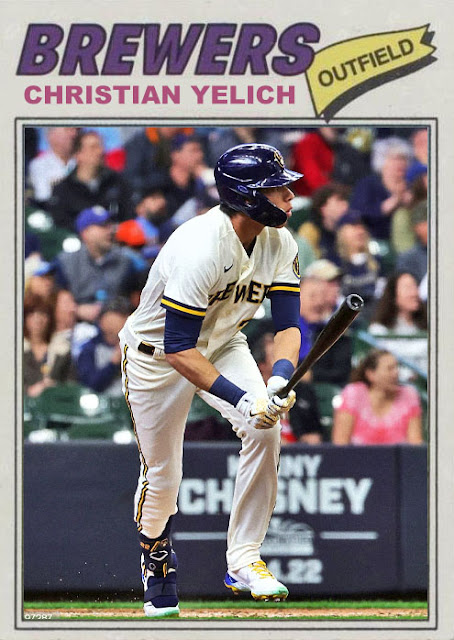 I think a lot of people have resigned themselves to the fact that Christian Yelich's peak was from his age-24 season in 2016 to his age-27 season in 2019. He had a very strong run, played for some great teams, won an MVP and nearly won a second one. And it was a great time, but he's no longer in that peak period, and a majority of people have accepted that.

...Christian Yelich has not accepted that, though.

So far, Yelich is hitting .250 with 20 RBIs and 5 home runs. Perfectly sane numbers. But Yelich is striving for more, and he's trying to go bigger, and in that want to go bigger he's garnered 38 strikeouts. That's on pace for 158 strikeouts, which would be a career high. Remember in 2019, the season he came 2nd in MVP voting, Yelich only struck out 118 times. That's low for 2019. And then he had 76 strikeouts in 58 games in 2020, and...look, I think he's just chasing the dragon at this point.

The Brewers are at a point where they can rely on a full ensemble of people for a variety of things, and it's less and less reliant on Yelich being the complete leader he was in 2019. Like, yes, it helps and all, but we still have people like Lorenzo Cain, Willy Adames and Andrew McCutchen, who can also be the centerpiece if they want to. Plus, Yelich isn't the most consistent power guy on this team anymore- Hunter Renfroe and Rowdy Tellez are both bringing excellent power numbers so far, and they've both amassed 9 home runs each. I'm not saying the Brewers have evolved past the need for Christian Yelich, because they definitely still need him, but...I don't think they need him to be the only marquee guy anymore.

We're now at a point where the starting pitchers aren't the nobodies that they were. Corbin Burnes has a Cy Young now, people come to Milwaukee to see him pitch, and he delivers. Burnes has a 1.5 WAR, a 2.26 ERA and 62 strikeouts, he's on pace for another Cy Young if he desires. Despite Freddy Peralta landing on the IL yesterday, the Brewers have 4 guys with 48 strikeouts or more right now, and that includes Brandon Woodruff, who's a bit more scattershot than he's been in years. People come to see Josh Hader- the guy's got 15 saves already, and is on pace for 60. That's really damned good.

The goal is for Yelich to finish with a season he's proud of, and that the Brewers are proud of as well. At this pace, they're favorites for a playoff spot, and if Yelich plays a nice enough role in that endeavor, he'll be even. If not...the man may have to face the facts and modify his approach.

Coming Tonight: Outfielder and young standout from The Team That Wouldn't Die.