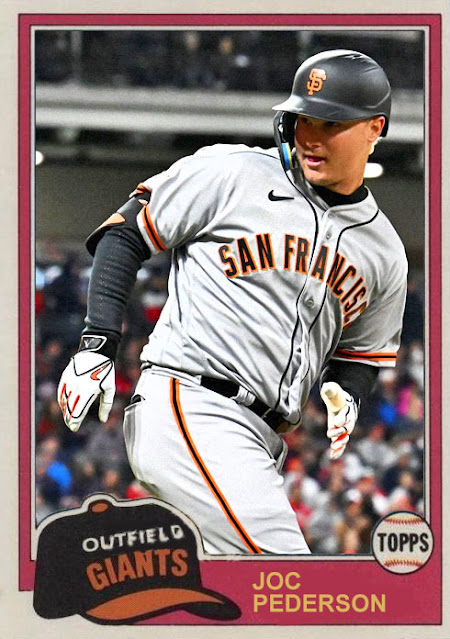 I'm still reeling from the Donaldson-Anderson thing. Still being wary of great players who may have beliefs that piss me off. Still smarting from Aaron Judge almost being an antivaxxer. Still a little shaken. So when I heard that Tommy Pham and Joc Pederson got in an altercation before a game a few days ago, I got very worried.

Worried mostly because everything I've seen from Joc Pederson paints him as a super guy. I remember him showing up to the Home Run Derby in 2015 and bringing along his older brother Champ, who has down syndrome. And man, speaking as someone who runs a little league for kids with disabilities, there is nothing more awesome than seeing a kid with down syndrome or autism being told they're part of the team. So Joc bringing around Champ and introducing him to all these players and teammates, that was a cool thing. Joc's also a rare Jewish baseball player, and I've already been burned by Shawn Green and Ryan Braun. So I was genuinely worried that, after Josh Donaldson's name-calling, that Pederson was the instigator.

But no. Turns out Tommy Pham's just an asshole.

The whole thing was a whole overblown brouhaha that started because Tommy Pham thought that Joc broke a rule in their fantasy football league by benching Jeff Wilson for an injury. And while Joc was trying to be diplomatic and explain how what he did was perfectly fine, and that it's literally only fantasy football, Tommy Pham just goes and slaps him. And then Pham gets a suspension, which, honestly, for something so childish, he deserves. You don't do that shit on the field, you send angry texts and do it that way. Joc did the right thing, and thankfully he didn't fight back at all.

Meanwhile, this is all going on as Gabe Kapler, who's always been a few steps ahead of a lot of other people, is talking about skipping the national anthem in the light of recent events. And...look, I don't talk politics on this blog because it never does anybody any good. We're all spread out geographically, financially, and sometimes politically, and I'm not gonna make the mistake of parading in here with my beliefs. But...I think Kapler does have a right to do what he must in response to things like these, and to sit here and assume that America's the greatest country in the world while we allow what we allow so willingly is hypocritical.

And the Giants have been standing by him for the most part, which is great. I know that if Sam Coonrod was still on the team, he'd be livid about all of this, but they threw him to Philly, which...has its own issues with racism anyhow. Unsurprisingly, the one person who's spoken out in opposition to Kapler, the most progressive manager in baseball....is the most ARCHAIC manager in baseball, Tony LaRussa. Who's doing his usual 'that's not how things should be done' schtick. And I don't know about you, but I'm honestly tired of Tony LaRussa telling people half his age, a quarter his age and such, how things should be done. I know Tim Anderson agrees with Kapler, but he's afraid to do anything similar because he plays under Tony LaRussa.

I think I'm just pleasantly surprised that a team is making political statements and stands against people and they're all pretty much in the right mindset. Kinda rare these days.

As for the Giants themselves, they're still a bit too far behind the Padres and Dodgers, are a bit injury-bitten in places, and don't have nearly as much depth as they did last year. But they do have a strong rotation, a strong bullpen, and power hitters like Mike Yastrzemski and Joc Pederson helping the cause. This isn't a perfect team, especially in comparison to last year, but it's doing a lot of things right, and it might pile up in the long run.