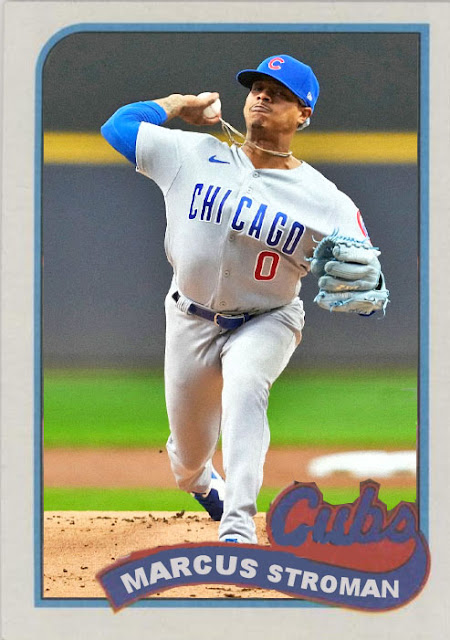 I remember when the Game of Thrones cast was beginning to get asked about the final season, you could see a lot of them wincingly try to hide their disdain. I remember Emilia Clarke especially looking pained as hell going 'best season ever', just...not loving what she had to do for work that year.

Marcus Stroman must know a lot about how she feels.

When Stroman got traded to the Mets in 2019, according to a lot of sources, he was a bit caught off guard because he was expecting to get traded to the Yankees, and he grew up a Yankee fan. And so his response to the trade was basically 'yeah...the Mets are okay too I guess'. And while he did pitch pretty well in Queens, especially last year, you could tell he was a bit dissatisfied with the whole ordeal. Being traded out of Toronto before the playoff runs, being stuck in New York, but not the good one.

And...I don't know how substantiated these claims were, but not too long into his time as a Chicago Cub, I think I saw inside reports saying 'Stroman's already miserable, he wants to be traded'. And then the season started and...the Mets are one of the best teams in baseball and the Cubs can't even stay out of fourth.

You look at so many people on this Cubs team, and you're just going 'they were tricked'. Seiya Suzuki was gonna sign with the Padres and then he stuck to his guts and went with Chicago, cause they were 'always there for you'. Yeah, they were always there because they needed a new advertising hook. Wade Miley was traded from the Reds, a sinking ship, thinking he'd be getting a big step up, and really...an 18-26 3rd place team is not much of a step up. Andrelton Simmons, Jonathan Villar, Drew Smyly, they all thought they'd be heading somewhere somewhat competitive. But, no.

And, look...I would say that this team is lucky to still have Willson Contreras and Ian Happ, but...I'm thinking both of them are gonna get traded in July. Contreras will be a Yankee probably, Happ will be a rent-a-Giant. And the Cubs still do have people like Patrick Wisdom and Frank Schwindel and Nico Hoerner, but...come on, man. The age of futility is upon us again in Chicago, and they all know it.

I just hope Marcus Stroman has a season he's proud of on the mound. Because this isn't what he would have got if he'd stayed in Queens.

Coming Tonight: Of the plethora of rookies to come up in Seattle, would you believe that this one has been the most successful thus far?