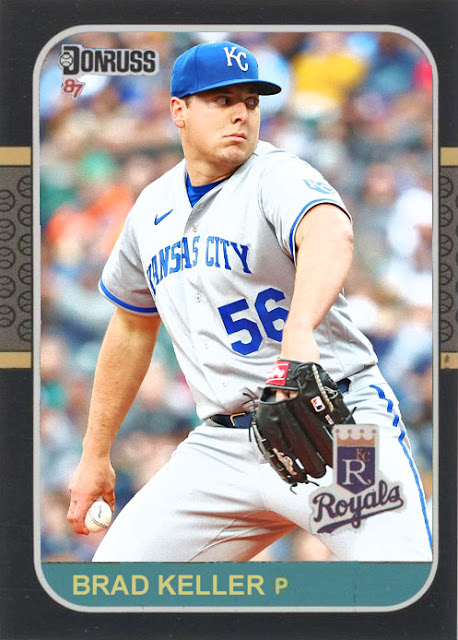 The Royals clearly aren't good this year, but they are capable of doing very, very good things amidst the badness. For instance- the Royals have organized a bunch of people who can throw very hard and that's exactly what they're all doing.

Like, okay...Brad Keller. Not quite the strikeout artist that he was, he's limited himself to around 5 Ks per start, but he's got a 3.95 ERA and a 100 ERA+. Greinke is out, the team needs a solidified, reliable ace, and Keller, the senior most Royals pitcher right now, is the closest thing they have to that. And look, you can do a lot worse than Keller as a staff ace, honestly. At least he has experience, unlike the Reds guys. At least he's on target, unlike Eduardo Rodriguez. At least he's healthy, unlike John Means. He'll do.

But behind him you have Daniel Lynch, and after a struggle of a time last year, Lynch seems to have figured things out. A 3.92 ERA, a team-leading 37 Ks, and a comparatively low amount of earned runs. Lynch might be the showoff of this group, the 'damn he's fast' guy, and Lynch seems to be alright with that. I always thought that would be Brady Singer, and while he's coming into his own now after starting the season in the minors, he's overall been less reliable. The Royals also have Jonathan Heasley, who, laying it right down the line pitching to Jose Ramirez notwithstanding, seems to be doing the right things thus far, even if he's being hit too much. Now that Greinke's out they might try Kris Bubic again, and though his 2022 offerings have been spotty so far, he's had promising stuff and he can deliver consistency when he gets comfortable.

Compare this assortment of young arms, this batch of Keller, Lynch, Singer, Heasley, Bubic and I suppose Jackson Kowar, to the gang of youths in Cincinnati. Why them and not the Reds rookies? Well, the Royals guys just have to work the background and cover til Merrifield, Perez, Benintendi and Witt get going, and right now they ARE going. The Reds guys have barely any offense to protect them, and without the experience they're getting killed. Lynch, Singer, Keller and Kowar have had time to die. And now that they've been beat up a bit, they know the drill, and they can pitch 5 or 6 innings now.

Again, not a perfect team, I see some pieces getting dealt in a few months to pave the way for a team Witt can lead, but...with this pitching, things could be a lot worse.