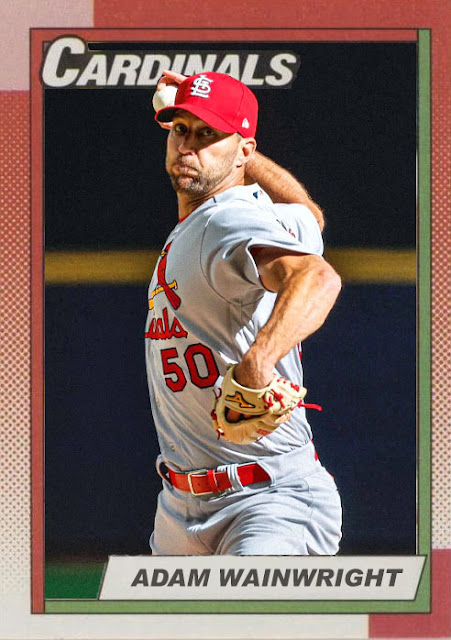 And that's honestly one of the reasons why sportswriters are gonna have a field day with his Hall of Fame case at the end of the decade. Wainwright not only had his peak, from 2007 to 2014, but where most careers would end around the time he misses seasons due to injury and has a comparatively lackluster full season [so 2019], Wainwright just kept going. His 2020 was great, last year he was excellent, going 17-7, his best record since his peak years ended, and now he's leading the Cardinals rotation ONCE AGAIN in Jack Flaherty's absence. And once again, might I stress that this man is 40 years old, and he still throws scorching fastballs.

In analyzing the strikeout artists of the 2010s, and in figuring out which ones are bound for the Hall of Fame, you have a bunch down pat already. Verlander, Greinke, Scherzer, Kershaw, they're all going in. Kluber, Cole, deGrom, Strasburg...there are cases. Waino was one of the best pitchers in the league for a good 7 year period, and is currently STILL one of the best pitchers in the league. There'll probably be one guy that goes 'WELL WHAT ABOUT THOSE YEARS IN BETWEEN', forgetting that Dennis Eckersley is a Hall of Famer. Or somebody'll go 'he doesn't have enough individual accolades', even if he finished in the top 3 of the Cy Young voting 4 times and has a World Series ring [woulda had two if he wasn't having Tommy John during the 2011 season].

I also point to how much of a leader Wainwright became after Chris Carpenter retired. How the rotations would be designed basically around him. I also think about the 2015 season, where the Cardinals used John Lackey as the replacement Waino, and tried to make a recreation of that environment with a similarly tenured pitcher, and it WORKED. It saved Lackey's career and it allowed for an eventual Waino comeback. And in every season where the Cardinals have designed things around Flaherty, things have evened out to circle Wainwright instead, and it's still worked. The man has a 2.83 postseason ERA, 123 postseason strikeouts, and saved the last game of the 2006 Series. The accolades are there. The longevity is there. I think there's a case to be made.

As for the 2022 Cardinals...I'll say it again, this is the kind of Cardinals team that can lift my decade-long hatred of that organization. I thought they had a perfect lineup going into the season, and now that they've brought up Brendan Donovan, Nolan Gorman, Juan Yepez and Matthew Liberatore, the lineup's somehow even better. This team could do crazy things in the postseason, and I see them lapping the Brewers soon enough.

Coming Tonight: I hope none of you worried the legend was over.