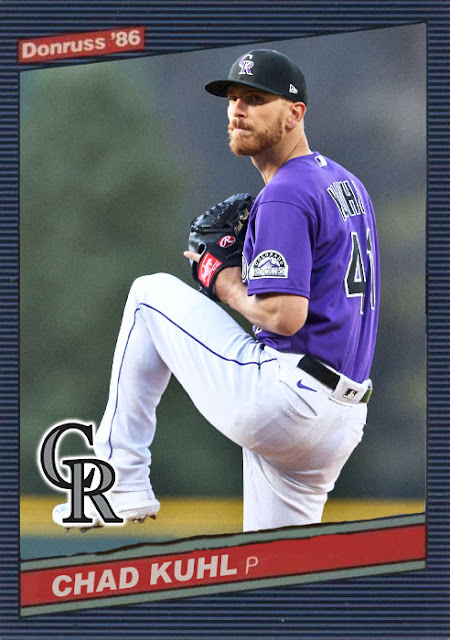 How is a career 4.33 ERA starter who's come in and out of the IL for Pittsburgh for 5 years suddenly working with a sub-3 ERA after 7 games in one of the toughest pitchers' parks in baseball?

I don't get it. Maybe this is some stuff Kuhl has been hiding all these years, maybe he was stuck hiding behind people like Gerrit Cole, Jameson Taillon and Ivan Nova, but...it's vexing to me. Last year, he was given the head of the rotation, the Opening Day start, and he only ended up starting 14 games with a 4.82 ERA before being passed over for the likes of Wil Crowe and J.T. Brubaker.

I'm glad that he has this here in Denver, and now when they need him, but I wonder where all this was in Pittsburgh. It's a lot like Carlos Rodon suddenly springing to life last season. Maybe it's that late-20s stride a lot of pitchers can hit. Maybe there's no science to it. I don't know.

At the moment, though, Chad Kuhl and his outrageous start is one of the few good things to talk about as far as the Rockies are concerned. I mean, you can't really go wrong with a core of C.J. Cron, Charlie Blackmon, Ryan McMahon and Connor Joe, and having Austin Gomber and Kyle Freeland in good shape always helps, but this team is teetering on the brink of .500 and below the Diamondbacks in the standings. Maybe you can make the case that the series with Philly turned the tide for the Rockies and pointed out most of their flaws, but it's a point I am too humble to make.

The main issue with the Rockies is that the bullpen is godawful and only Daniel Bard and Tyler Kinley have really shown up from it. But there are smaller issues, like the heart of the lineup, Kris Bryant, going down on an injury, bad defense, the number of blowouts, and the complete lack of control coming from German Marquez. Any sign of promise this team had in April seems to have vanished, and all they can do is hold onto success stories like Kuhl and Cron as if to say 'well at least it wasn't all bad'.

I do think the D-Backs are gonna drop back into 5th at some point, but I'm not sure if the Rockies will be a bottom feeder for the majority of the season.

Coming Tonight- The Orioles' new man above the marquee, just as I predicted in 2018.