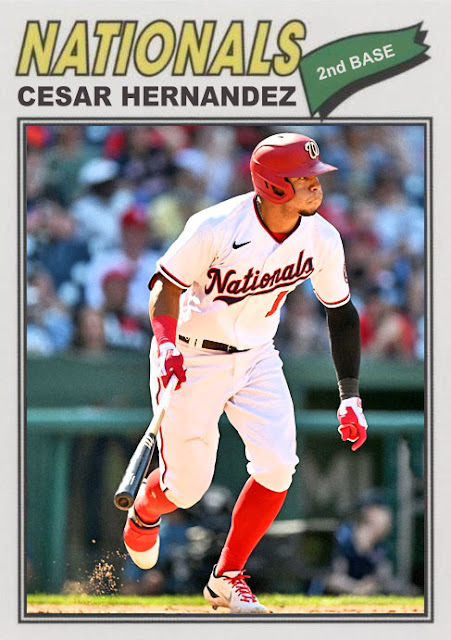 On a team with Nelson Cruz, Juan Soto and Josh Bell, would you believe that the current hits leader on the Washington Nationals is CESAR HERNANDEZ?

The Nationals, as you can expect from a team still using Victor Robles and Patrick Corbin in starting roles, are not doing well. It does help to have Juan Soto and Josh Bell, as well as some nice starting energy from Josiah Gray, but the majority of this team is replacement level players just lucky they have a job still. So many of the players who came in last year and impressed in big roles aren't doing any of that right now. Riley Adams and Lane Thomas aren't hitting, Alcides Escobar's back to doing nothing at the plate, Nelson Cruz is finally hitting like a 41-year old, and Keibert Ruiz, while doing better, isn't where the prospectors thought he'd be by now.

Plus, because it's a last place team, you have even more wild preestablished players getting work in. Dee Gordon's got a bench role. He's not hitting and he hasn't stolen any bases, but he's still employed by a major league team, pretty much in order to have a hug with his stepbrother when they play Minnesota. Aaron Sanchez is the fifth starter, which is something I just learned 30 seconds ago. After a decent enough go of things in San Francisco last year, he's back to being a somewhat trusted starter. All that remains is for him to get his ERA under, like, 7. Sean Doolittle's back for a victory lap, and although he's currently injured, he seems to be back to where he was before he left. And waiting on the IL for a 2022 debut are Ehire Adrianza and Anibal Sanchez, proving literally anybody can suit up for the Nationals this year.

On one hand, I am kind of glad that this team still has Soto, Bell, both Yadiel and Cesar Hernandez and Josiah Gray, but that's pretty much all they have to work with this year. The other 4 in the NL East have a lot to work with, even to do so badly. The Nats are just trying their best to stay at it with some very tough teams this year, and even if they do have great moments from Soto or whoever, it's just gonna make the inevitable lousy finish a little easier to stomach.

I am glad the Nats won when they did. I just wish it wasn't such a quick run.