Mean Jean and the Phightin' Machine 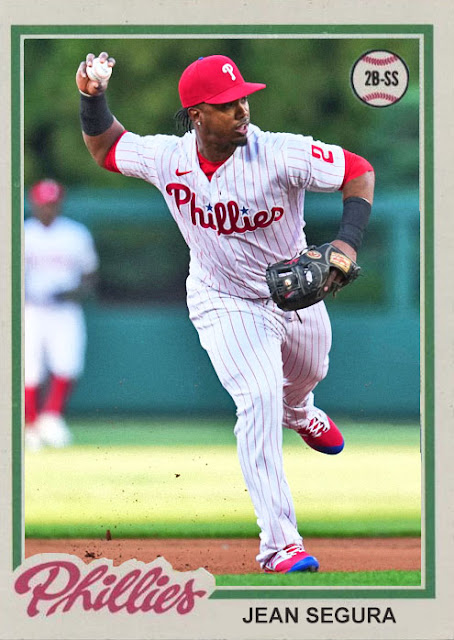 In 2019, the Phillies signed Bryce Harper, J.T. Realmuto, Jean Segura and Andrew McCutchen. I think it's an understatement to say that they've all done well there, even if Cutch is now in Milwaukee. Harper has a 13.9 WAR since joining the Phils, J.T. has a 10.4, and Segura has a 7.9. What's cool is that in Segura's 4 years in Philly, he's eclipsed his WAR earnings in all four other teams he's played for, including the Brewers, who he's played for around the same amount of time, the D-Backs, where he had a 6.4 WAR in 1 season there, and the Mariners, where he had a 7.4 WAR in two seasons.

So what that tells me is that Jean Segura hasn't performed with quite the pop of his prime years in Arizona and Seattle, but he's still an excellent everyday second baseman, and so far he's on par for another strong season. I think what's struck me about Segura this year in particular is how reliable he's become for us. He's hitting .289, he has 18 RBIs, he's still a major defensive piece that's a leg up from some of the more inexperienced types like Bohm and Stott, and people around the clubhouse love him.

And honestly, I'm very thankful that with all the inconsistencies of the last few years in Philly, Harper, Realmuto and Segura have remained reliable pieces and are just as much factors in this team as they were when we got them. You hope that everyone you sign major deals to will deliver for you, and these three have. Harper has an MVP, Realmuto's started every ASG he's been able to, and Segura has continued his impressive run into his 30s. None of these guys have flamed out. Wheeler and Gregorius haven't flamed out. We've picked good people and put them into the right places. It's just...sometimes none of them perform when they need to.

And that's the sort of limbo the Phillies are perpetually in. They'll have huge games where the offense comes alive and the starters go for 7 and everything feels great, and they'll have games where none of them show up and the bullpen gives up 5 runs and nothing goes right. I saw one of each of those in the last month. I saw a great win agains the Rockies and a stifling loss against the Rangers. This is, and always will be, a Jekyll and Hyde team of the highest caliber. Corey Knebel will blow a save and then a night or so later will sweep through the ninth like it's nothing. Something about playing for the Phillies erases any opportunity to be consistent, and it confuses the hell out of me. Maybe it's the water, maybe it's the air, maybe it's Philly fans, I don't know. But this team should be able to get something done with all of this talent handed to them, and the fact that their only consistency is consistently NOT doing anything with it is maddening.

I'd love this team to make the postseason this year. I'm not holding my breath for it, though.

Coming Tonight: Well, look who's finally proving why he was the top piece in the Lindor trade!